Note, for all of the monthly and quarterly U.S. Dollar values herein, an approximate aggregate quarterly value has been calculated by taking the net supply added or removed each day and multiplying it by that specific date’s Coin Metrics End of Day (00:00 UTC) Reference Rate.

The additional net value added to crypto markets from assets included in this report during Q3 2021 was $1.9B,down significantly from the $10.5B that was added in Q2. The most significant reasons for this decrease was: 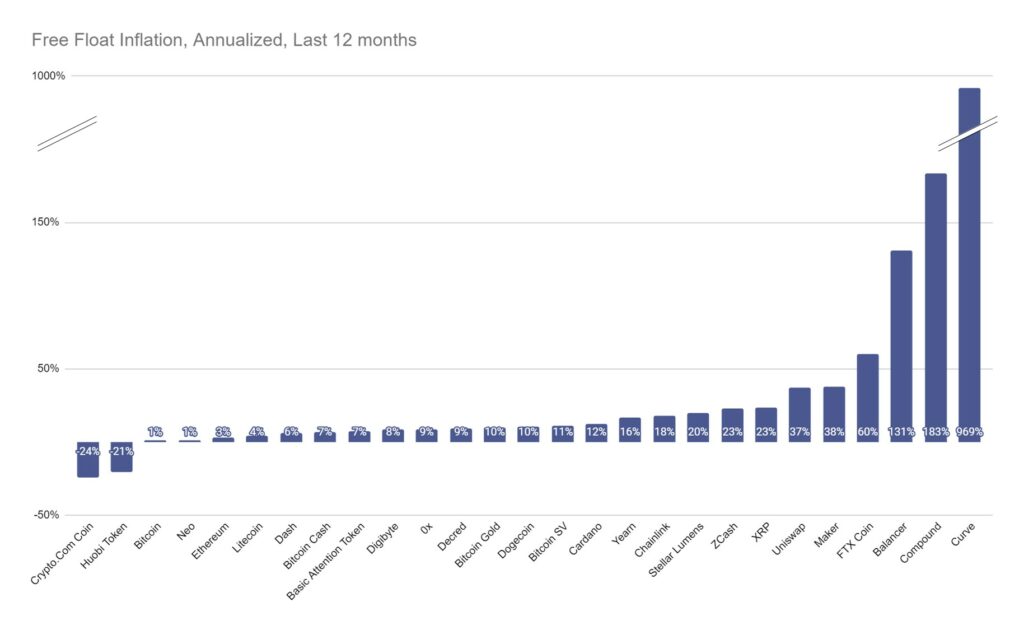 Note 1: Compound launched in March 2020, Balancer in July 2020 and Curve in August 2020, all with low initial floats and a liquidity mining program that contributed to their high early inflation.

Note 2: In February and April 2021, Crypto.com conducted two one off burns of 59.6B and 5B CRO respectively from Foundation controlled addresses.

The net value of cryptoassets that moved outside of identified Foundation/Company controlled addresses was $4.7B, during Q3 2021, up from $3.5B in the previous quarter. The two largest sources of this quarter’s Foundation token movements can be attributed to: 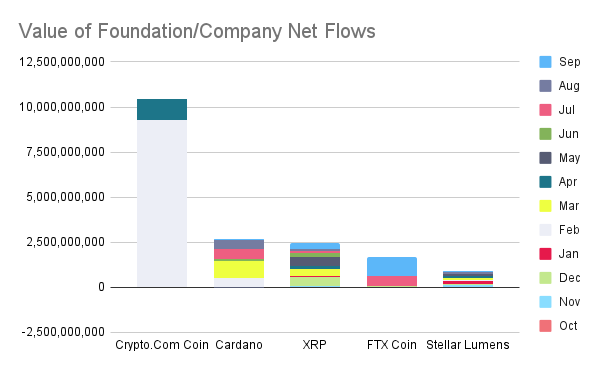 The net value of cryptoassets that moved outside of identified Company Team addresses decreased significantly in Q3 2021, falling to $650M to $3B. The team members that contributed most to changes in the free float supply of their assets during Q3 2021 were:

Note: Movement out of Team controlled addresses does not necessarily mean assets have been sold, but rather can be an indication of activity (e.g. movement to passive yield generating tools such as Compound). 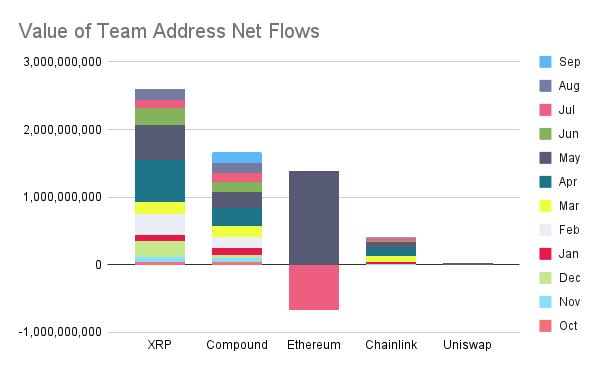 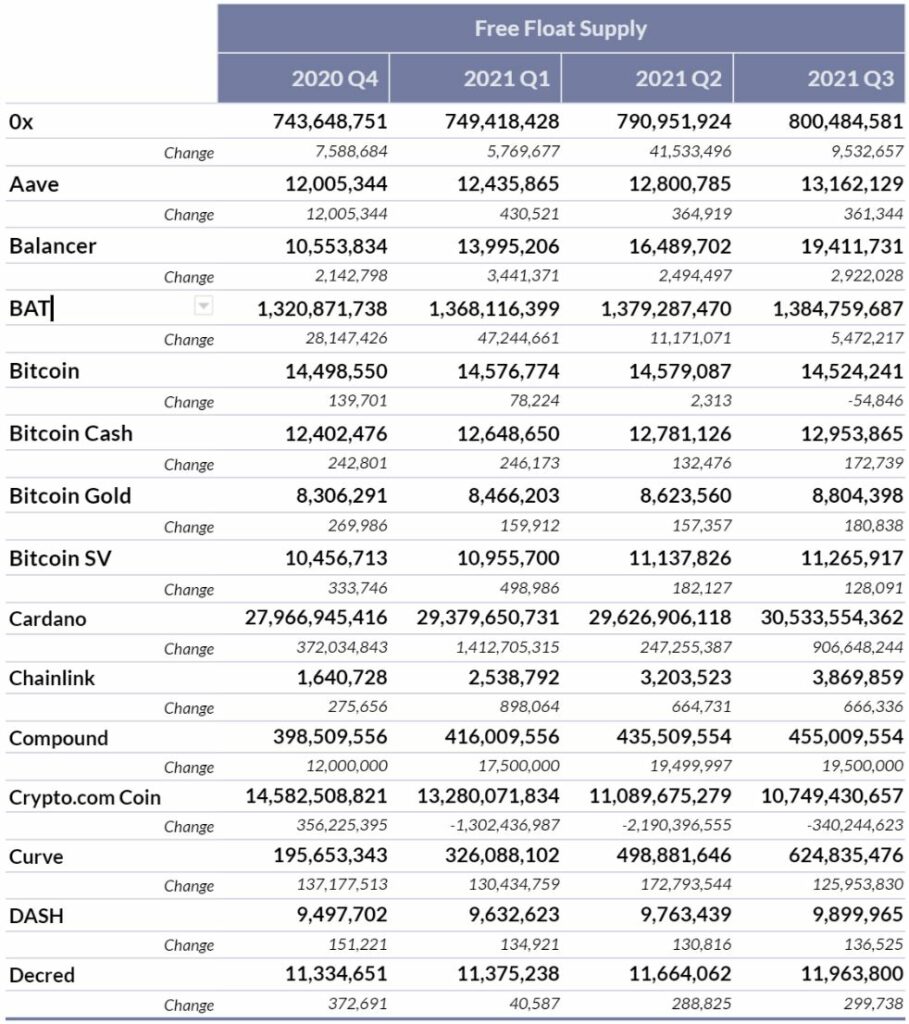 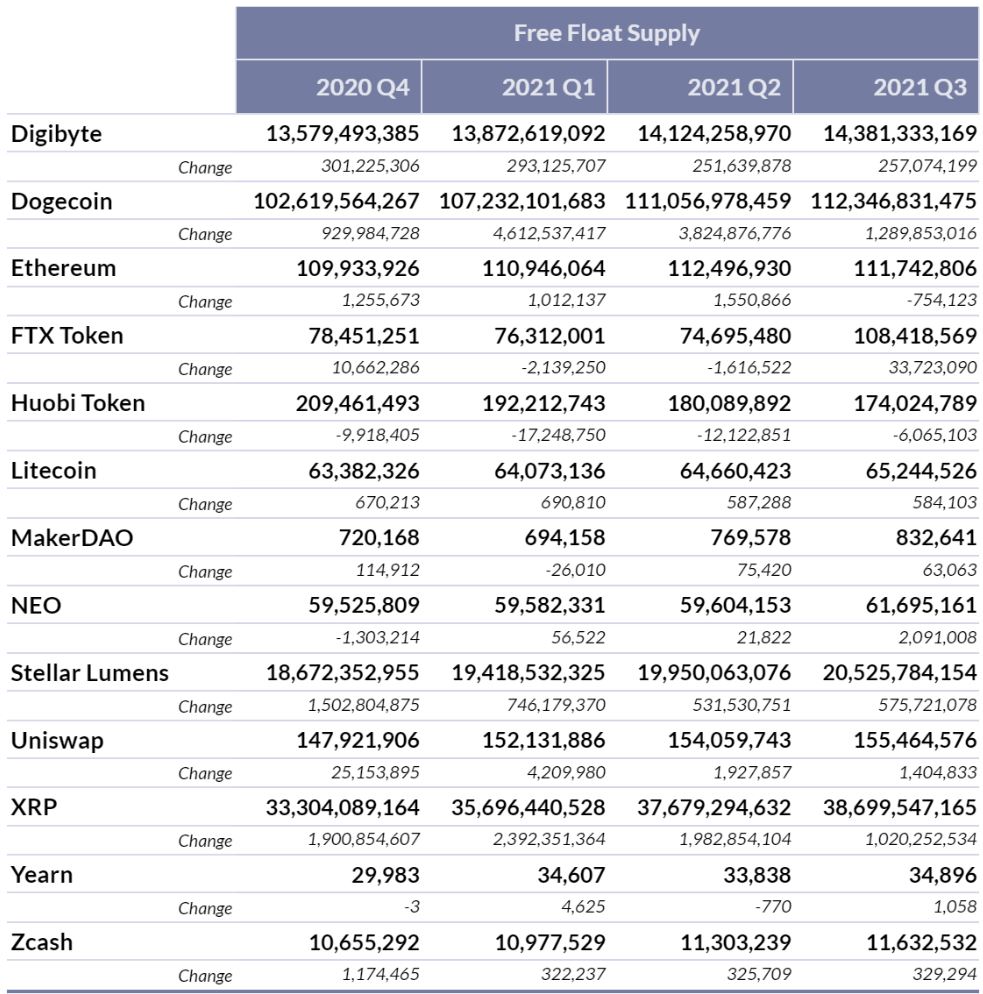 During Q3 2021, the total ZRX moved from Foundation owned addresses was 9.5M, an decrease of 24M from the previous quarter. It is worthwhile noting that in Q2, 21M ZRX were deposited into the ZRX vault and thus might have just been the foundation utilizing their treasury assets to make them productive. As tokens in the vault earn interest, perform governance functions and are indistinguishable from one another, they are considered to be active and thus more liquid than passively held assets.

The entirety of the 9.5M ZRX that entered free float in Q3 belong to team members. This was a reduction from the previous quarter (16.9M), but still a significant increase from Q4 2020 and Q1 2021, which saw a combined 4.2M tokens moving from closely held team member addresses.

Having only launched in Q4 of last year, there is limited free float history for Aave. At the end of Q3, Aave owned addresses still managed just under 3M AAVE. Of this amount, ~500K are still in the Migration contract, unclaimed by holders of  Aave’s previous token, LEND. AAVE also launched their liquidity mining in Q2 which led to an increased rate of emission from the AAVE DAO which now holds ~2.4M AAVE. Through Q3, there was a free float increase of 361K AAVE.

Balancer released 1,885,000 BAL tokens into circulation through their liquidity mining program, mimicking the same numbers from the previous 3 quarters. The number of BAL released from the Balancer Foundation into more liquid markets increased in Q3 to ~1M BAL. With a relatively small transfer of 5K BAL tokens from team owned addresses to more liquid markets, the net change to free float through the Q3 2021 was 2.9M.

Throughout Q3 2021, the quarterly increase of Basic Attention Token free float was its lowest over the last year. Only 5.5M new BAT entered circulation in Q3, down from 11.2M in Q2 and 47.2M in Q1. The majority of the reduction came from less activity from foundation controlled wallets, the most active being the ‘BAT: UPG Reserve’, which only had a net inflows of 6.4M BAT (3.6M BAT outflows and 10M BAT inflows from another foundation managed address).

The new Bitcoin issued from mining activities in Q3 2021 was 85.6K, which represents a return to levels experienced prior to the hash rate crash that resulted in slow block production times during Q2 after the Chinese mining restrictions came into place.

Bitcoin experienced its largest quarterly gain in long term holders (>5yrs without a send transaction) in Q3, adding 140K Bitcoin and removing them from the free float supply.

This resulted in a net free float reduction of 55K BTC for the quarter.

This resulted in a net free float increase of 173K BCH for the quarter.

Bitcoin Gold’s free float increased 181K BTG throughout Q3 of 2021, slightly higher than the previous two quarterly increases of ~160k BTG. The BTG added to the free float from mining activities (81K) matched the issuance in previous quarters given the steady issuance schedule. However, it was the additional 98K BTG that was added to the free float of Bitcoin Gold from coins that were activated for the first time since the BTG fork that resulted in the net free float increase of 157K BTG for the quarter.

Bitcoin SV’s free float supply increased 128K BSV during Q3 2021, down significantly from Q1 (498K BSV) and Q2 (182K BCH) 2021. Whilst the new issuance of Bitcoin SV from mining related activities was in line with previous quarters, only 46K BSV were activated for the first time since the BSV fork, the lowest quarterly increase in activated supply since Q3 of 2020.

This resulted in a net free float increase of 128K BSV for the quarter.

Cardano’s free float increased 907M ADA in Q3 2021, a significant increase from Q2, but lower than Q1’s record free float supply quarterly increase of 1.4B ADA. The majority of this quarter’s increase was the result of ADA from foundation controlled addresses into more liquid markets (690M). A further 208M was added to the free float from proof of stake emissions.

During Q3, 666K COMP were added to free float supply after a few issues which released unexpected funds from foundation wallets into more liquid markets. Of the total amount, 546K came from foundation controlled addresses.

During Q3 2021, Crypto.com had its quietest monthly foundation and team address activity ever. There was no activity of Foundation addresses and only a relatively small amount of CRO that transacted from Team Controlled addresses.

The net impact of all these changes was a reduction in CRO free float supply of 340.2M.

The free float supply of Curve increased 126M. This represents a decrease from Q2 (173M) but an increase that is in line with previous quarterly changes (Q1 2021 and Q4 2020). Curve is a relatively new protocol that launched in August of 2020 and has a predefined rate of token issuance that is set to continue at a similar pace for the next few quarters. The majority of the increase in free float supply was from increased issuance of tokens from foundation controlled addresses to liquid markets and the release of team controlled CRV.

DASH’s issuance from mining related activities in Q3 was 149K DASH, in line with previous quarters which were after the ~6.0% inflation rate adjustment that occurred during Q3 of 2020. During the quarter, there were 13K DASH that were identified as being inactive for over 5 years and as belonging to long term strategic investors or lost supply. The net result of the two aforementioned factors was an increase in DASH’s free float supply of 137K for the quarter.

300K DCR was added to the Free Float Supply during Q3 2021, largely in line with Q2’s increase (289K). The majority of the increase resulted from the 319K DCR that were added to the total on chain supply from mining activities during the quarter, with 37K DCR being removed from supply due to aging (>5yrs old) and foundation accumulation.

The Free Float Supply of Digibyte increased 257M DGB in Q3, a slight increase from Q2 (252M). Inflation from Digibyte mining related inflation continues to decrease every quarter, with 267M added this quarter, down from 272M in Q2 and 279M in Q1. There were also 10M DGB that were removed from free float during the quarter as they aged over 5 years without activity. As per the Free Float Methodology, these coins are classified as likely belonging to strategic long term holders or as being lost, thus not contributing to liquid markets (and free float).

Dogecoin’s significant rate of free float increase slowed down in Q3, with only 1.29B tokens added to the free float supply, of which 1.26B are from mining related activities. The additional increase in free float supply was from a net reduction in the number of DOGE held by long term holders (>5 years without a send transaction).

Ethereum’s free float decreased for the first quarter ever, with a net reduction of 754K. The primary contributor to this was the 1.26M ETH that sits in addresses that aged over 5 years without sending a single transaction.

Also contributing to the free float decrease was the activation of EIP-1559 which resulted in ~400K ETH being burned and destroyed during the quarter. Minting of ETH from mining related activity still resulted in an increase of supply in line with previous quarters (1.2M).

During Q3, the free float supply of FTX Token increased significantly as 35M FTT moved from foundation controlled addresses to the FTX Exchange. Further, given the positive price performance of FTT, less FTT (1.3M) were burned (sent to the 0x000 address) during the quarter (FTX have committed to regular burns which are relative to their exchanges revenues. If the price of FTT grows faster than revenues, this will result in less FTT being burned.).

Huobi Token continues to be one of the most consistent deflationary assets in the crypto market, recording a reduction in free float supply every quarter of 2020 and 2021 so far. During Q3 the HT free float supply was reduced by 6.1M. This was comprised of:

Litecoin’s free float supply increased 584K LTC during Q3, which is generally in line with previous quarterly increases. Whilst the new supply from mining related activity remained relatively consistent, adding 672K LTC in Q3, a net increase to LTC in addresses that have remained dormant for over 5 years (88K) removed some liquidity from markets. The net result was an increase in free float supply of 584K LTC during Q3 2021.

The free float supply of MakerDAO increased again in Q3 2021, with 63K MKR added to the free float. The primary reason for this increase was due to a net decrease of 64K MKR from the MakerDAO Governance contract.

The NEO free float supply increased by 2M in Q3 of 2021, the majority of the balance coming from Team owned NEO that were moved to more liquid addresses during the quarter.

The Stellar Lumen free float supply increased 575M XLM during Q3 2021, in line with Q2’s increase. The entirety of the increase in free float can be attributed to Foundation owned addresses moving XLM to more liquid addresses during the quarter.

The free float supply of Uniswap increased by 1.4M UNI during Q3 2021. The entirety of this increase came from the transfer of UNI in addresses controlled by the foundation into more liquid markets. These UNI came from liquidity mining rewards and from users still claiming their airdrop from the UNI distribution address for the first time.

During Q3 of 2021, Yearn’s free float supply increased 1,058 YFI. The majority of this came from the increase of YFI held in foundation controlled addresses, most of which was used by the Foundation to stake in Maker to access DAI.

Zcash free float supply increased 329K ZEC during Q3 2021, very similar to the previous quarter’s increase. This low level again is the result of the recent ZCash block halving event in November of 2020.

There were no other known changes to the free float supply of Zcash. Note it is unknown if the foundation/team control assets if they utilize shielded transactions (privacy works!). 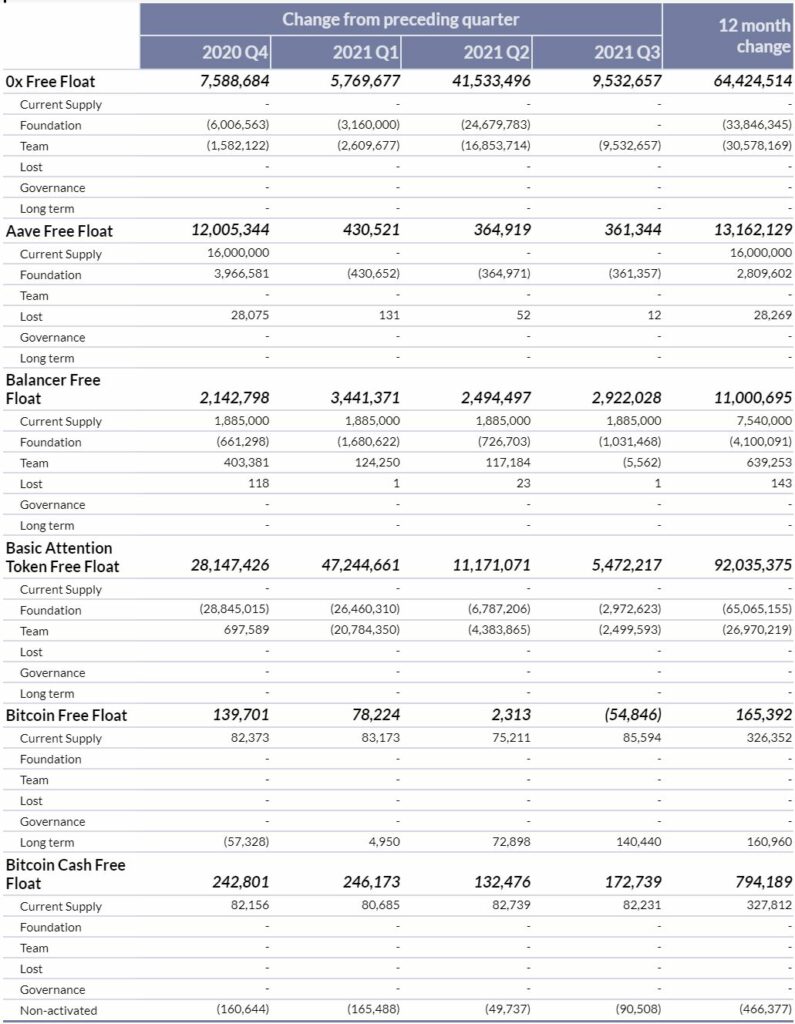 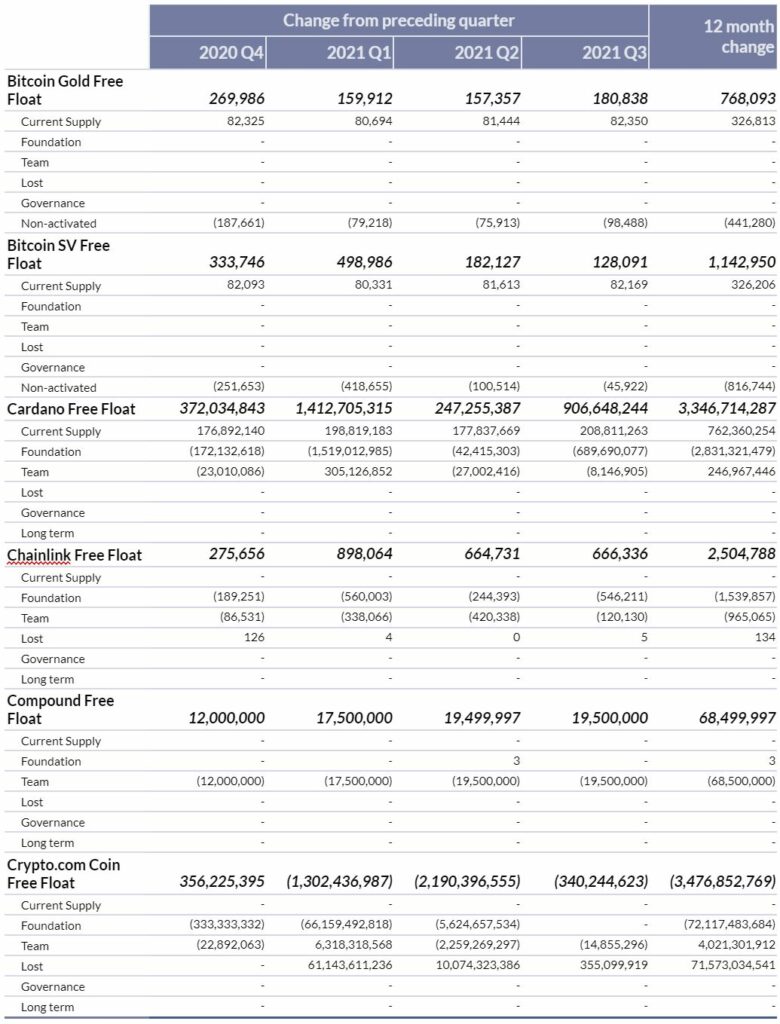 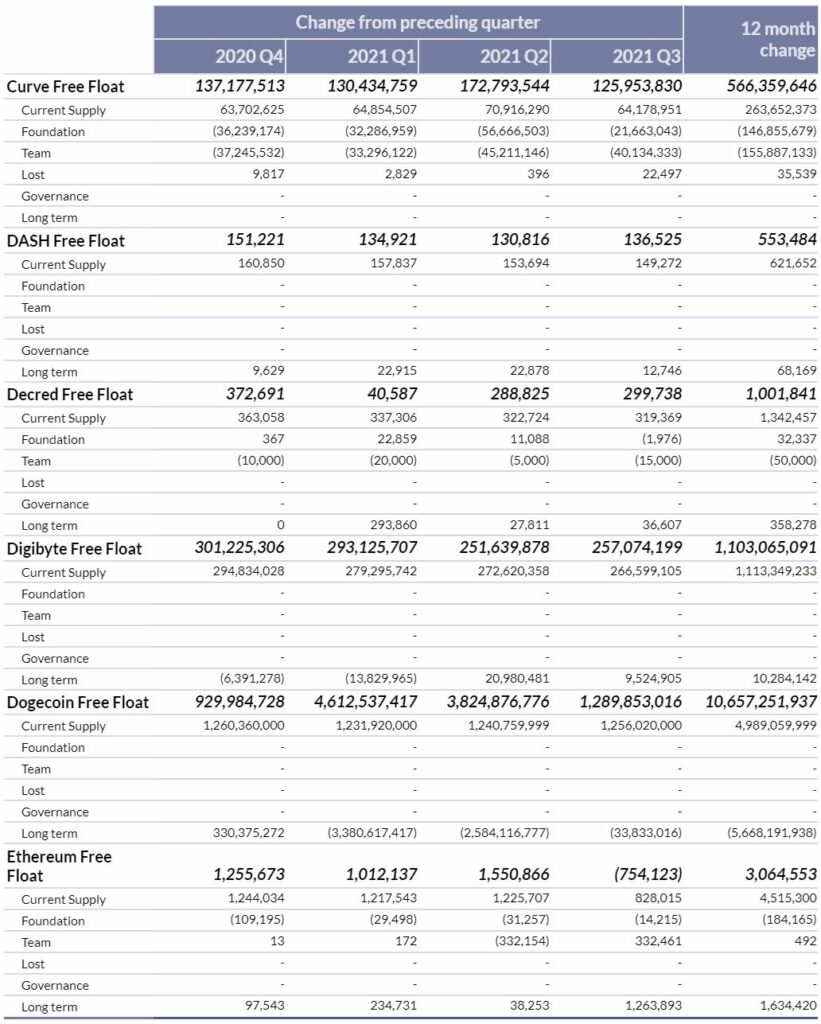 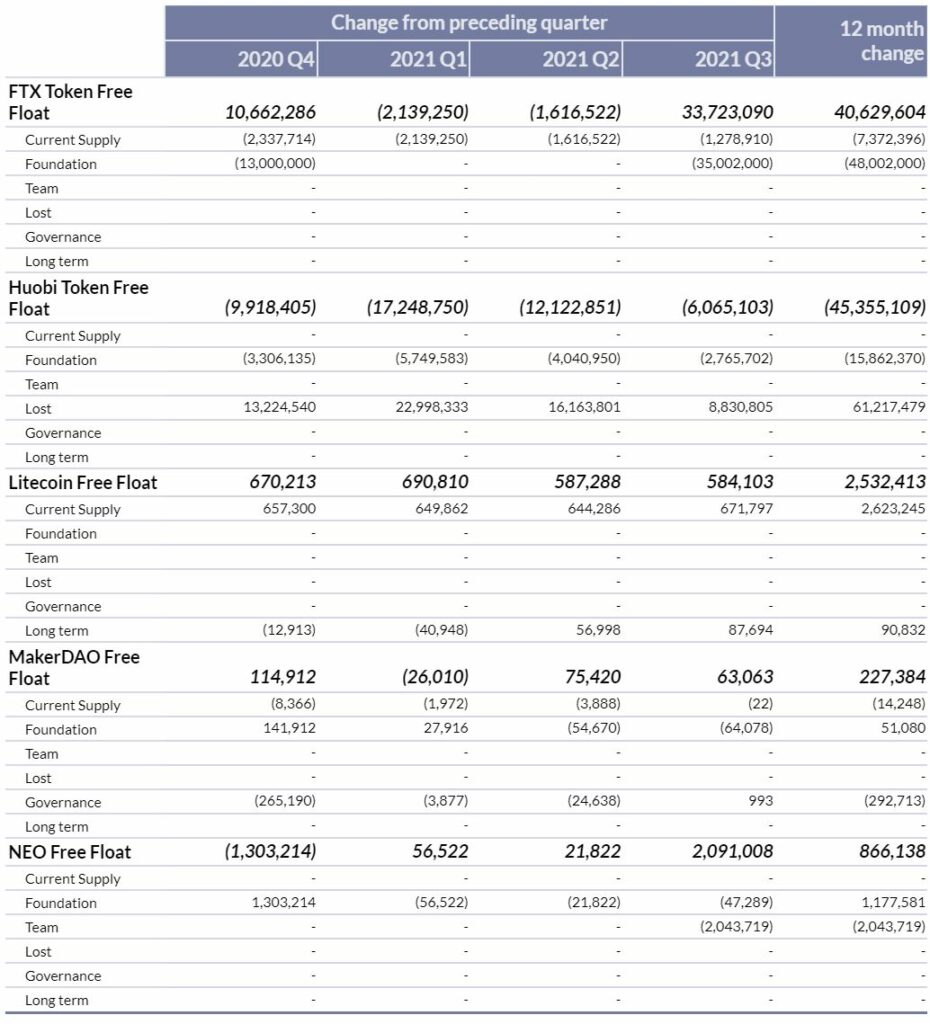 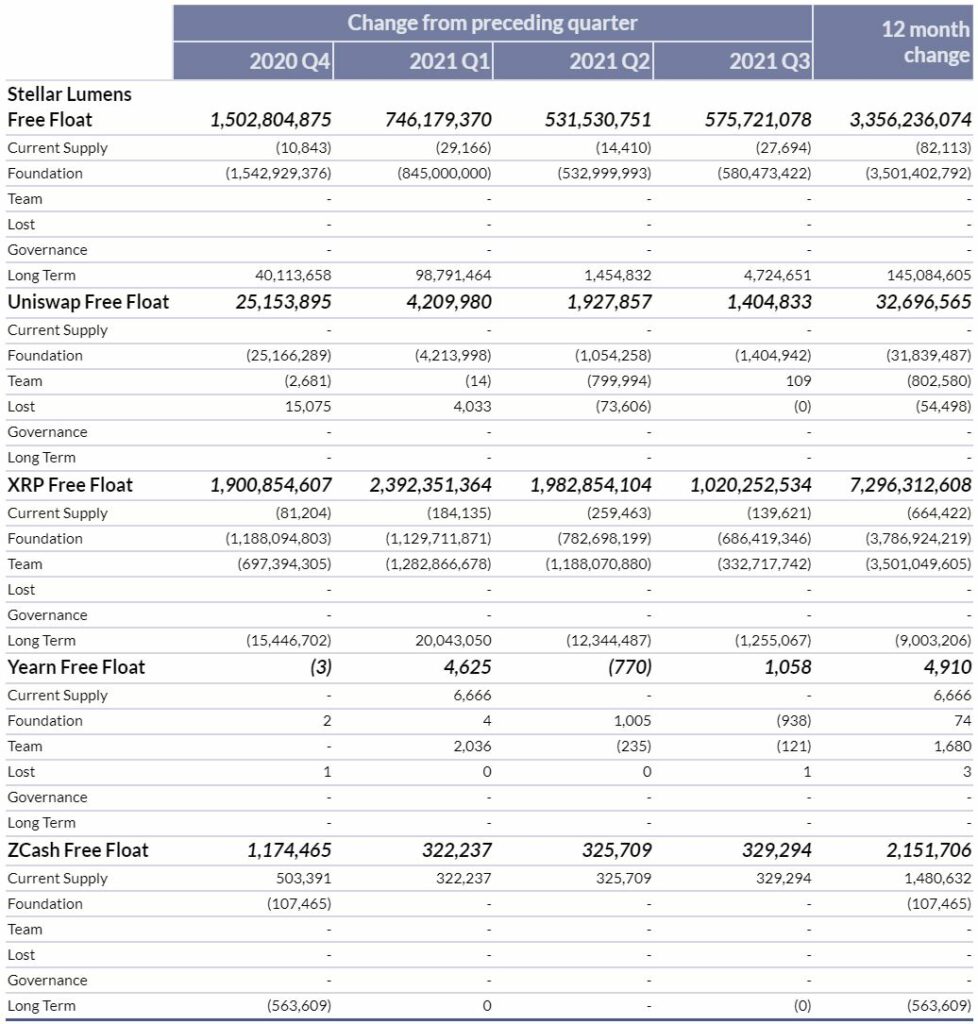 Coin Metrics launched CMBI to bring independent and transparent index solutions to the cryptoasset investment community. In the nascent and often complex cryptoasset market, CMBI Indexes strive to be dynamic and adjust to the rapidly changing market conditions to design and maintain investable products. CMBI Indexes provide markets and customers with industry-leading solutions that aid in performance benchmarking and asset allocation.