The Ethereum community has always had a somewhat strained relationship with miners. The network’s proof of work algorithm, Ethash, was explicitly designed to be resistant to ASIC mining and hence miner professionalization. Since then, the network’s migration to Proof of Stake has begun, with the ultimate goal of obviating miners’ role in the network entirely.

Until its transition to Ethereum 2.0 the network will continue to be supported by Proof of Work. Even before this transition, though, the economics of mining on the network are subject to change. This has most famously come to light through changes to the block reward received by miners and through unplanned reductions in miner compensation due to slow blocks stemming from the network’s difficulty bomb.

It’s also played out in the increasing compensation miners have received from miner extractable value (MEV), which is the extractable rent from ordering transactions. As on-chain arbitrage and liquidation transactions have become more profitable to execute, successful MEV execution has begun to play a much more significant role in miner economics.

In addition to Ethereum’s presently fluid monetary policy and the increasing importance of MEV, upgrades to Ethereum could potentially alter miners’ profitability. One proposal, called EIP-1559, burns a portion of fees rather than sending them to miners. Another motion under discussion, EIP-969, modifies Ethash to reduce the usefulness of ASICs on the platform, while a third, EIP-1557, proposes to change the Proof of Work algorithm entirely. EIP-1559 is slated for inclusion in the upcoming London upgrade, while EIP-969 and EIP-1557 seem unlikely to be adopted.

At this critical point in the network’s development it’s more crucial than ever to understand the role miners play in the Ethereum ecosystem. In this article, we build off the work from parts one and two in the Following Flows series, using data from Network Data Pro version 4.9 to analyze Ethereum miner activity. We find that Ethereum miner activity has increased dramatically over the last year, possibly as a result of increasing MEV extraction, and that miners primarily sell on Binance and Huobi.

At a high level, the metrics work by breaking up mining activity into two classes: 0-hop activity that corresponds to mining pools, and 1-hop activity that corresponds to miners. Addresses that have received a block reward are categorized as 0-hop addresses, while addresses that have received payment from a 0-hop address are categorized as 1-hop addresses. This mirrors the typical flow of funds in mining, where a pool operator receives block rewards and miners receive payouts from the operator.

By applying this same methodology to Ethereum we see that miners control an increasing amount of ether (ETH), and the supply held by pools is comparatively small. In particular, the amount of ETH held by miners increased substantially in 2020. 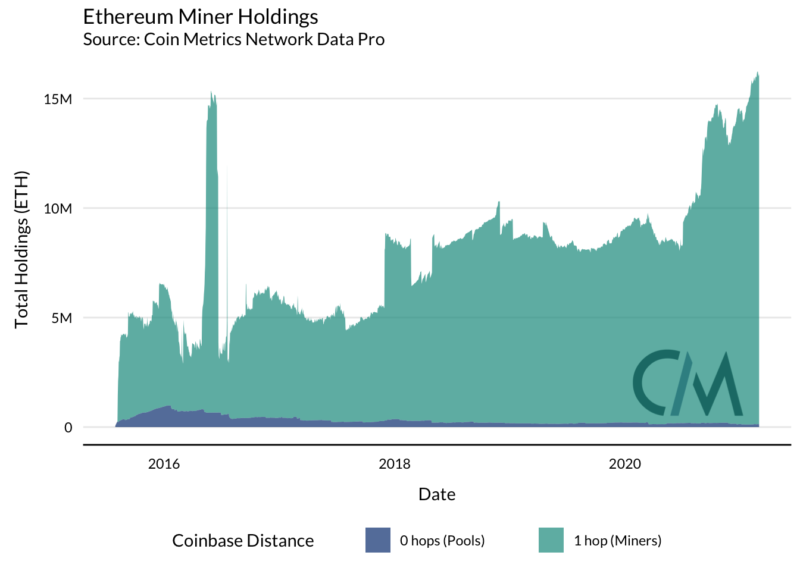 Because of Ethereum’s premine, a majority of the native token supply was not generated by miners. As a result, miners’ share of the total ETH supply has never been high. Along with their increase in raw value, miner holdings have also generally grown over time as a percentage of the network’s total supply . 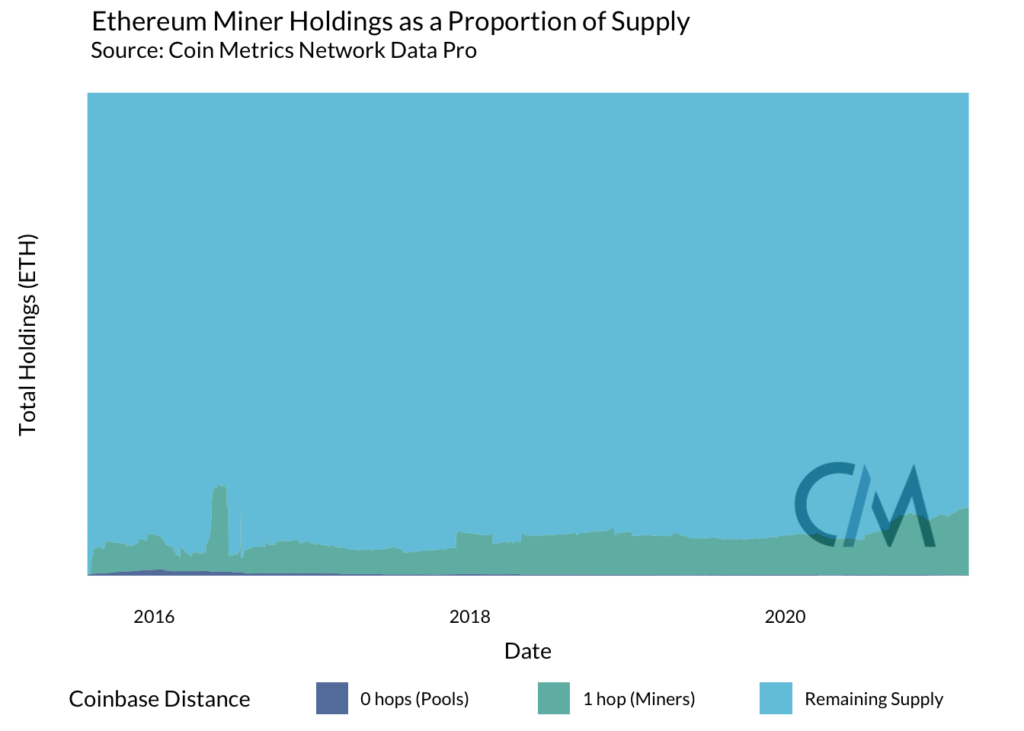 This is quite different from Bitcoin, where Proof of Work has been the primary coin distribution method, and miners’ share of the native token supply has generally declined as the network has matured.

In addition to observing miner holdings, we can also analyze flows in and out of pool addresses. While these flows are largely insignificant, they’re useful in contextualizing the broader miner flows discussed in the next section. Much like Bitcoin, Ethereum pool addresses deal with relatively small volumes, with inflows and outflows generally moving in tandem.

0-hop outflows are more volatile than inflows, which are primarily composed of block rewards. Miner revenue from block rewards is somewhat unpredictable due to the network’s fluid monetary policy and high fee volatility. 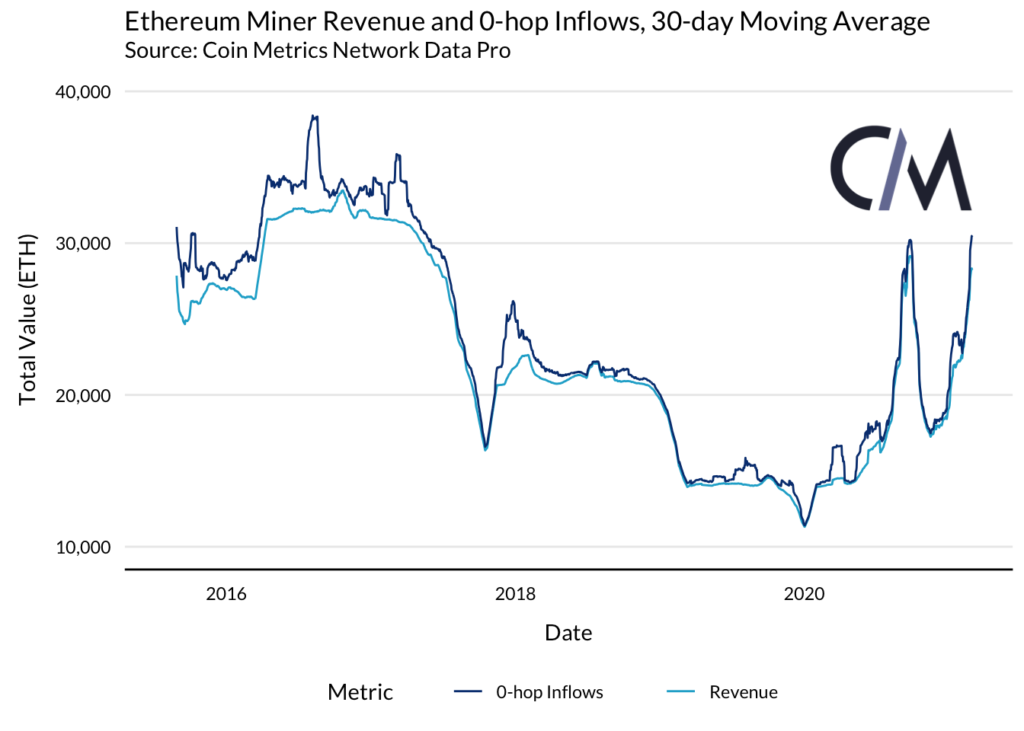 While mining pool spending is far from its all-time high in native units, in dollar terms it has continued to soar. This reflects the rapidly appreciating price of ETH.

Mining pools comprise a relatively small proportion of total miner activity. As in Bitcoin, Ethereum miners play a broad role in the ecosystem that is not fully captured in 0-hop flows alone. 1-hop flows are about an order of magnitude larger than their 0-hop analogs and have increased dramatically over the last year. 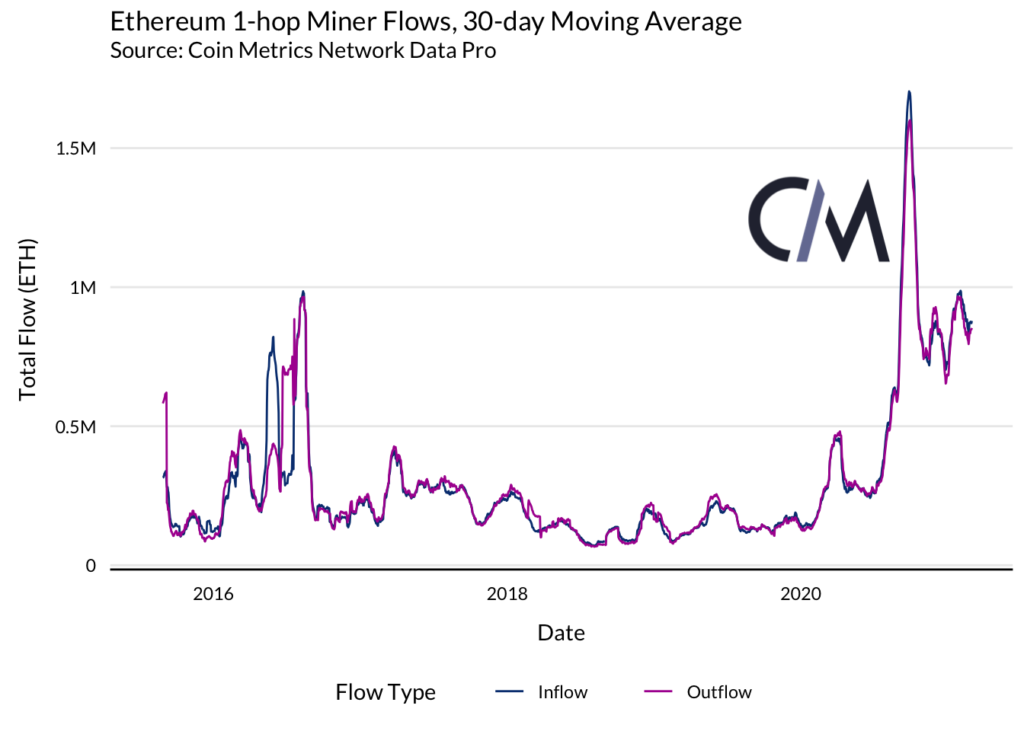 The rapid increase in both inflows and outflows appears to be part of a broader trend over the last three or so years, with miner activity making up a growing percentage of network-wide transfer value. Pool flows have remained relatively insignificant, further highlighting the importance of looking one hop out to assess miner activity. 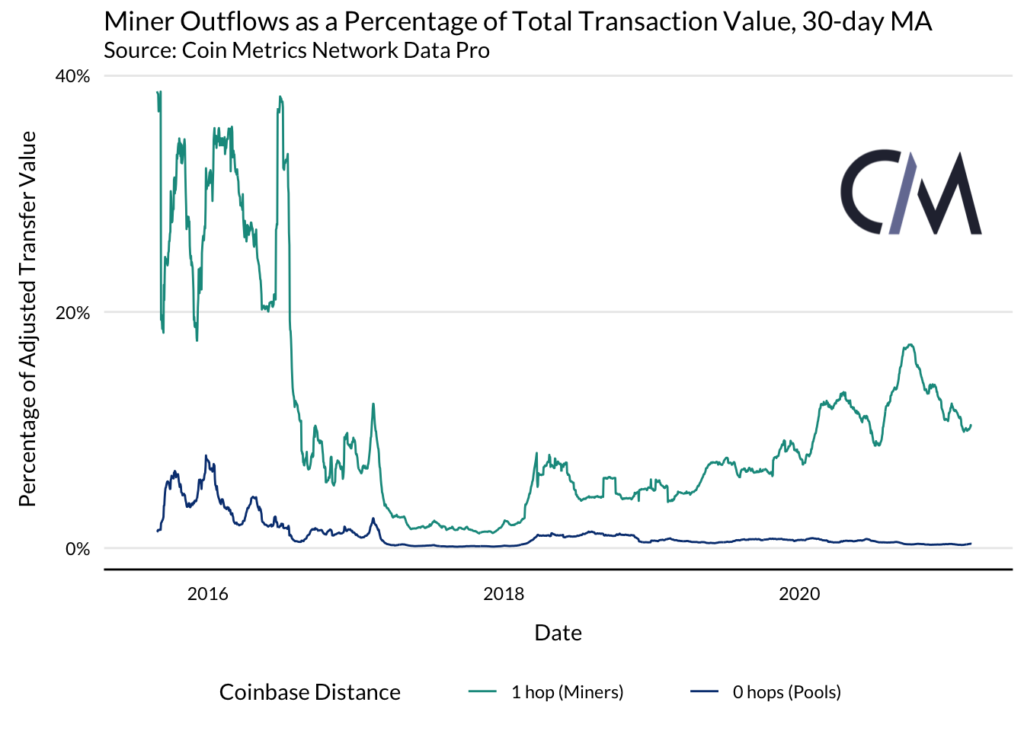 There are several reasons why the broader increase may be occurring, including simply maturation of the network. The most recent run-up, though, could be related to MEV: entities with relationships to mining pools may be performing on-chain arbitrages and liquidations to earn money outside the protocol-specified block reward. If these addresses have received payment from a mining pool at least once, they’ll be tagged as a 1-hop address by our heuristic and their inflows and outflows will be categorized as miner activity. Because the heuristic casts a wide net, it’s likely that much of this activity is actually performed by traders and arbitrage bots that are not directly affiliated with miners.

Like the gross values, 1-hop net flows have grown substantially in magnitude over the past year. This could also represent the increasing role of MEV extraction in miner economics. 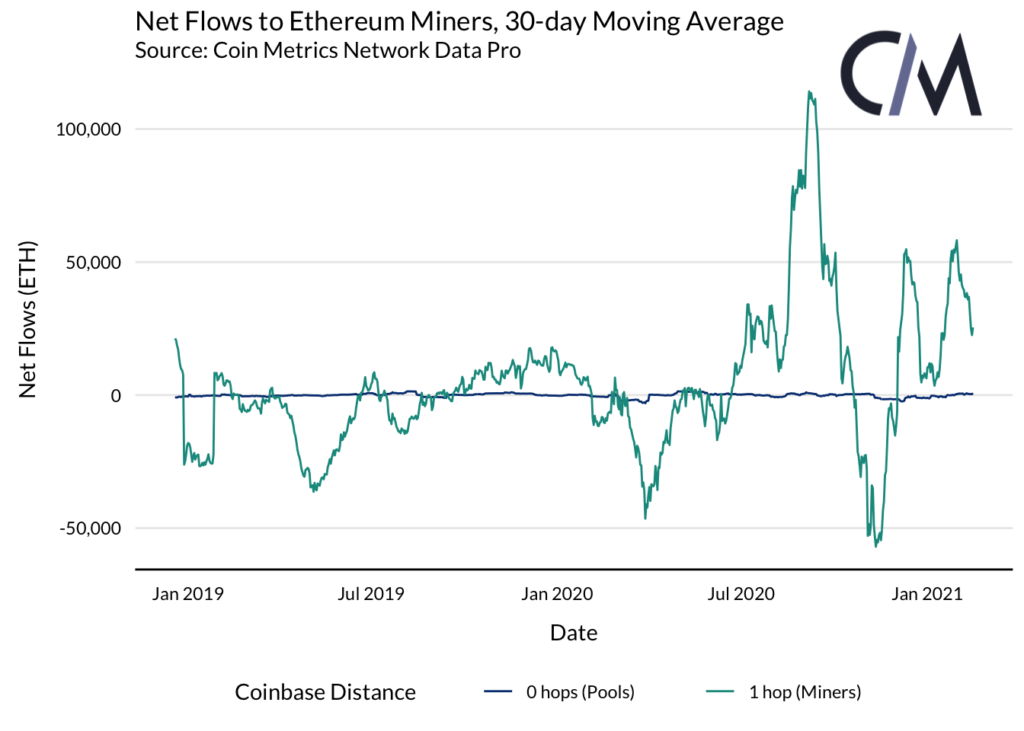 In Following Flows II: Where do Miners Sell? the Coin Metrics team announced the release of flow metrics measuring the interactions between miners and exchanges. These metrics iterate on our standard miner flows, giving a more granular view of miner activity.

Deposits by miners onto exchanges can be used to gauge how much and where miners are selling. Like Bitcoin miners, Ethereum miners generally tend to deposit coins onto Binance and Huobi. These large Asian marketplaces have well-established ties to miners, with both exchanges also operating mining pools. 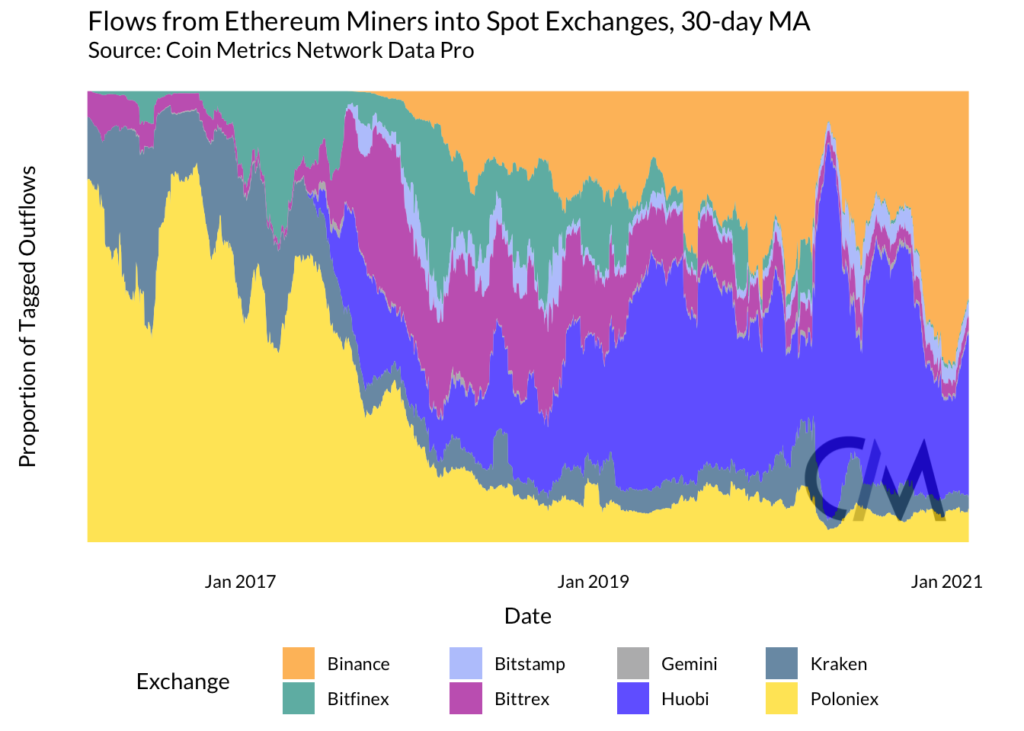 Compared to a baseline of their network-wide share inflows, Huobi and Poloniex command outsized market share among miners, while Binance’s share of miner inflows is roughly commensurate. 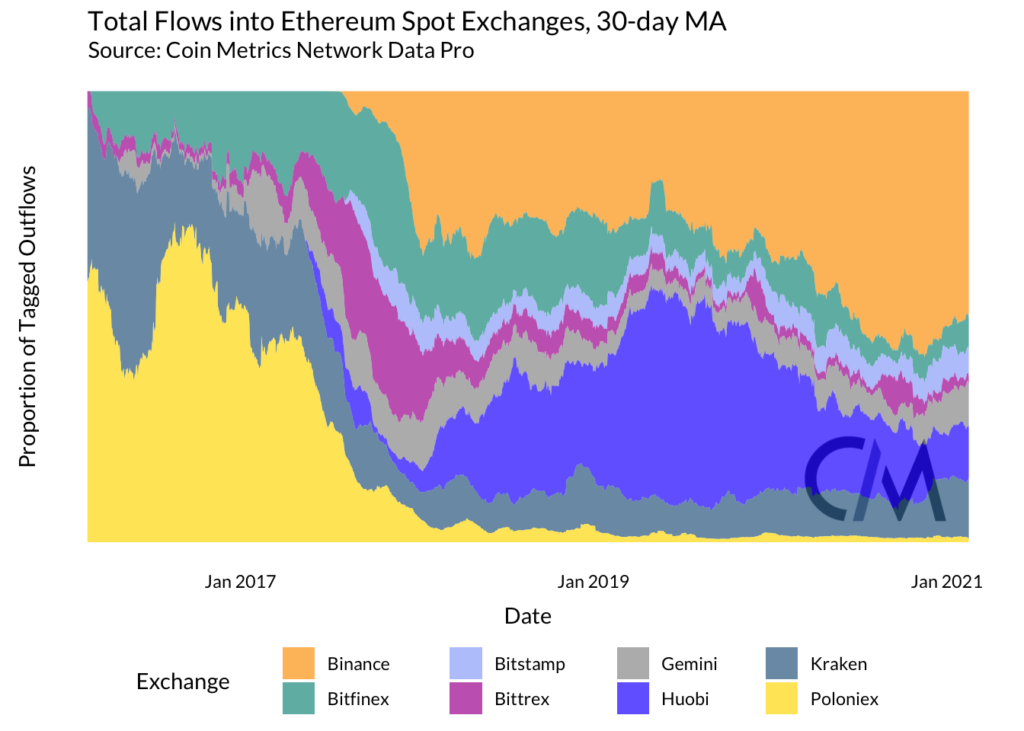 The plot of exchanges’ shares of miner withdrawal is similar to that of miner deposits, but more volatile. For some reason, much of Huobi’s share of miners’ on-chain withdrawals appears to have been recently overtaken by Kraken: the reason for this is unclear, and the result is likely to be anomalous rather than indicative of a real change in the market. 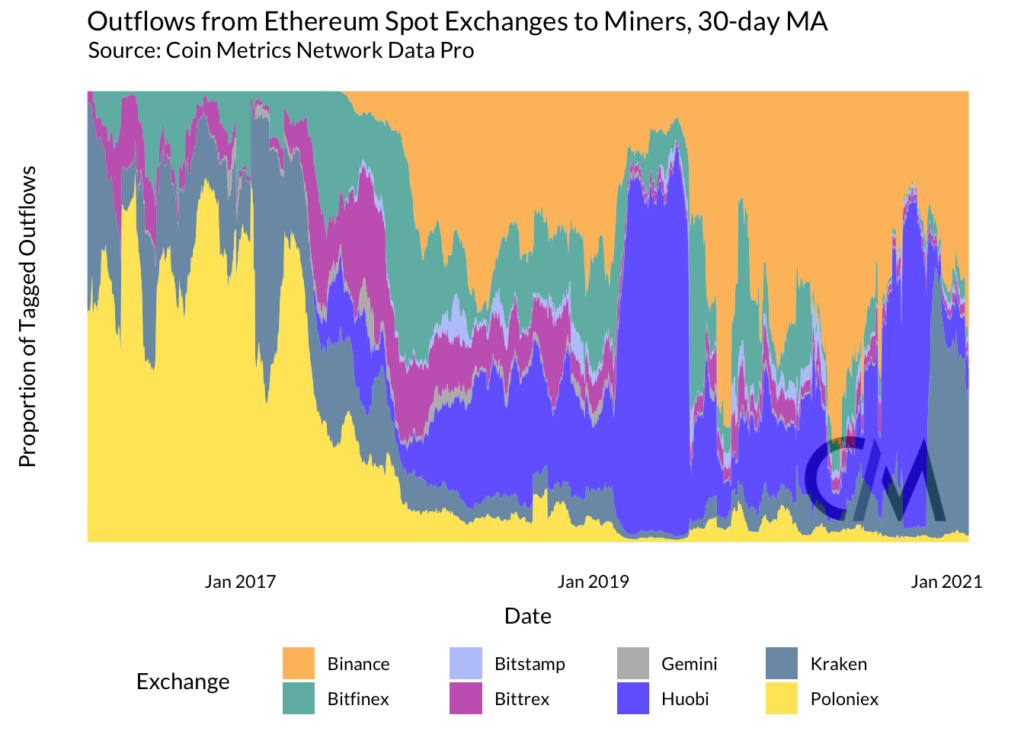 Aggregate miner-exchange flows are also a valuable source of information. As expected, miners are typically net depositors: this is intuitive since they can acquire coins off-exchange by mining. 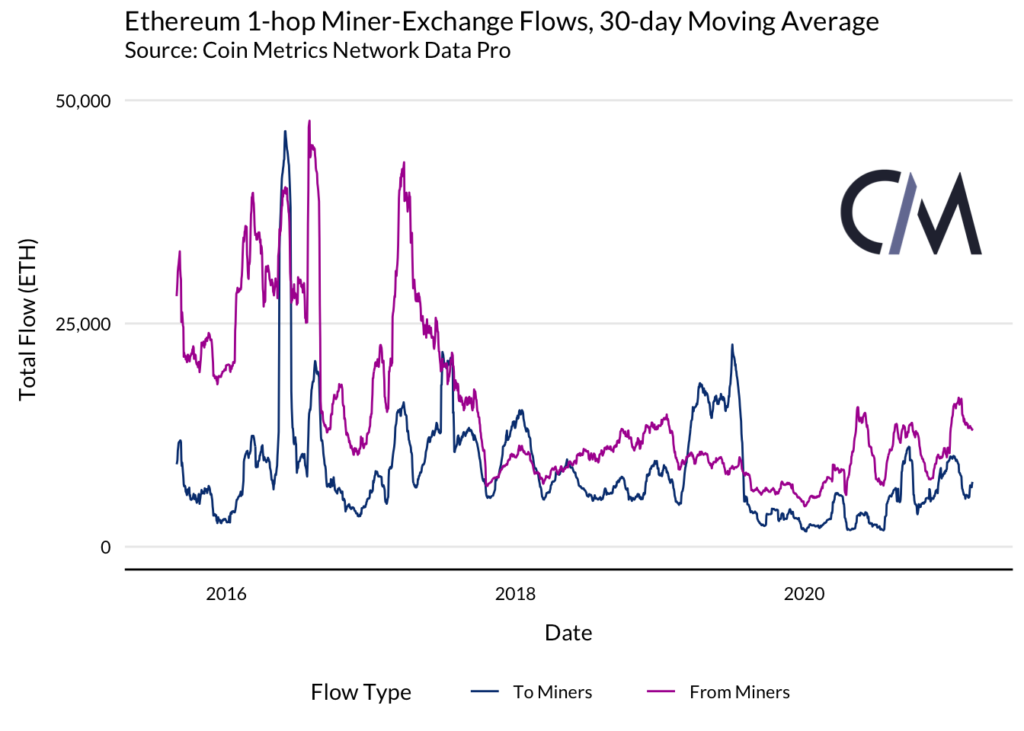 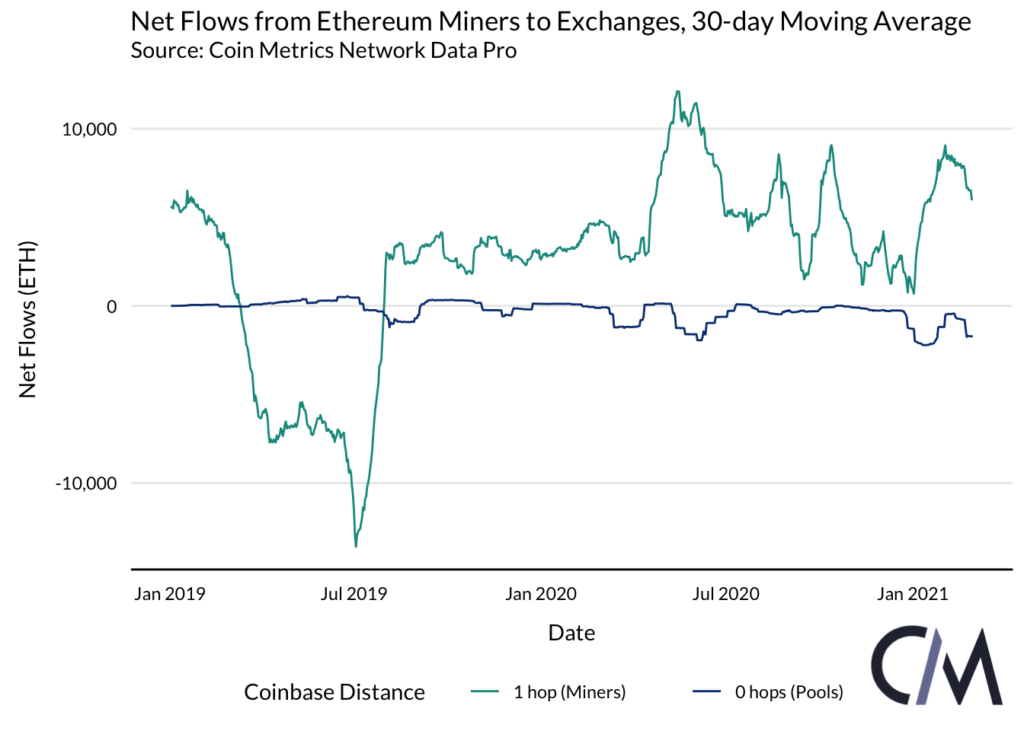 Because they’re natural sellers of the asset they’re securing, miners are frequently blamed for market volatility. In Ethereum, as in Bitcoin, these accusations are baseless, since miners typically account for a small single-digit percentage of exchange inflows. While a significant amount of miner selling occurs over-the-counter (OTC) and therefore does not immediately reach exchanges, changes in miner activity are not nearly large enough to warrant concern. 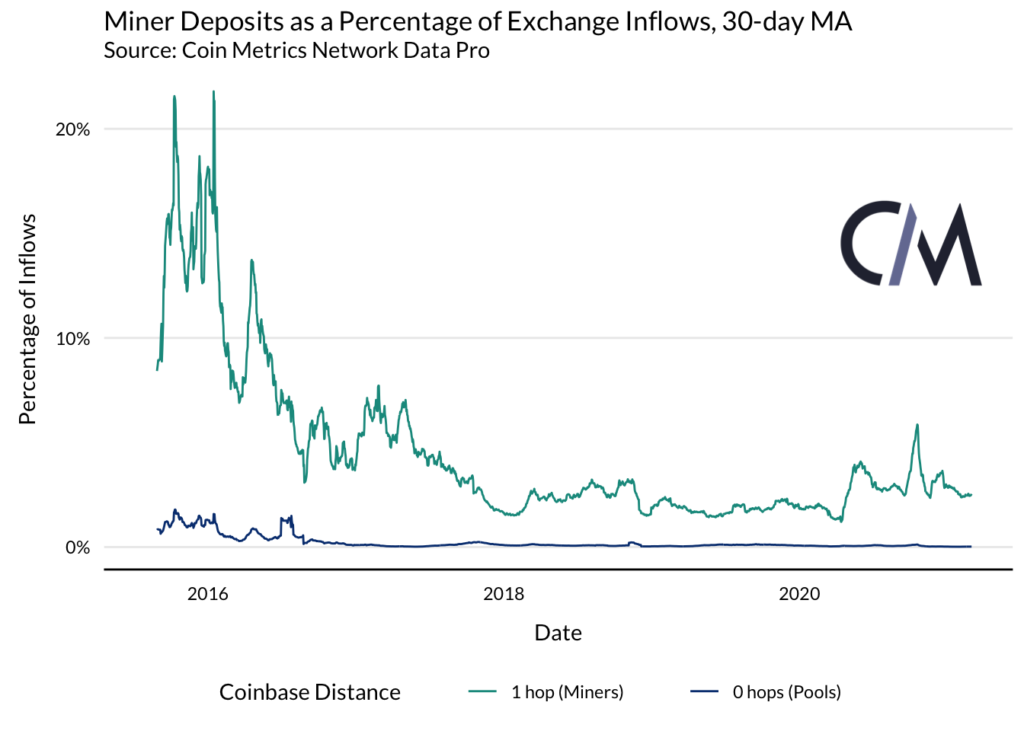 A quick correlation analysis appears to support the lack of a substantial relationship between changes in miner selling and market volatility.

If miners were responsible for dips in price, we would expect consistent moderate or strong negative correlations between spending and price. Currently, there is little evidence that miners cause market corrections.

Ethereum mining is at a critical point, with the community considering several proposals that would radically change the network’s mining economics and MEV playing an increasingly large role in miners’ profitability. What’s more, these changes are occurring in the context of broader plans to migrate the network to Proof of Stake, further complicating the situation.

Mining is generally very opaque, and this is arguably even more true for Ethereum than Bitcoin. By providing insights on the role miners play in the network at this crucial time and making this data available in the 4.9 release of Network Data Pro, we hope to provide some transparency in the activities of the miners securing the second-largest cryptoasset network.

Thanks to Celia Wan and Hasu for feedback and edits.