Coin Metrics is pleased to announce the release of NDP 5.0, which features 30 new metrics and 5 new assets for on-chain analysis.

Users of our Network Charts and API Catalog will see that Dfinity Internet Computer (ICP) features “CM Labs” or “Experimental” tags, respectively. ICP is being released under our CM Labs initiative, which enables us to add experimental assets to NDP with the caveat that service uptime might not be as optimal as more established assets. These tend to be relatively new assets with fragile nodes, which means their metric availability and service uptime might be impacted without prior notice.

CM Labs enables us to be faster at releasing newer networks and assets to our clients that are still under active R&D. As exciting as this is, we advise caution when using CM Labs data for critical operations as the tag signals that these assets have not been as extensively tested relative to more established networks.

Ethereum recently went through a considerable change in its monetary policy. Popularized as EIP1559, the name of its implementation proposal, this change introduced a new pricing mechanism for Ethereum transactions. Instead of paying for a gas price, Ethereum users must pay a mandatory base fee as a prerequisite to have their transactions included in a block. Base fees are dynamically adjusted to reflect network usage: they go up when there is increased demand for transaction settlement, and programmatically go down when that demand tapers.

Ethereum rallied for the adoption of this transaction type for one key reason: after a user pays a base fee, that fee is burnt. In other words, units of Ether used to pay for base fees are permanently taken out of circulation. This is a sharp contrast to the previous system, whereby all transaction fees were sent to miners. In order to track Base Fee prices and supply burnt, we have devised a new set of metrics for EIP1559 transactions: 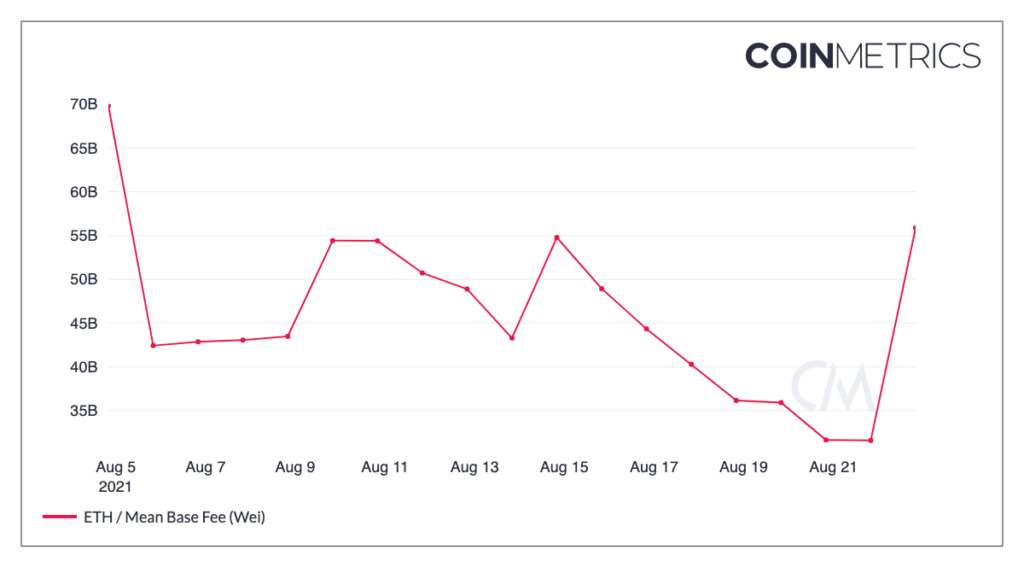 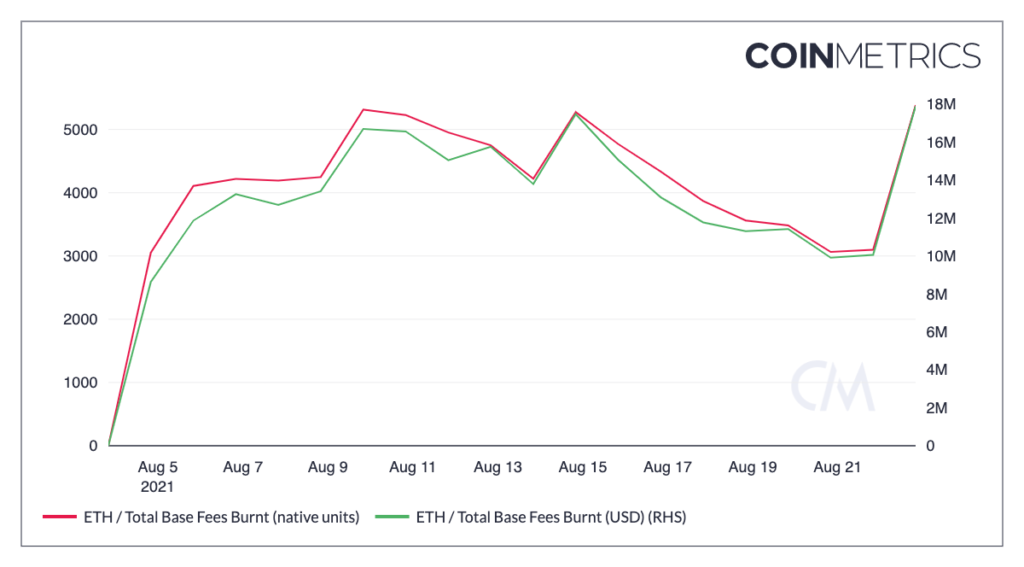 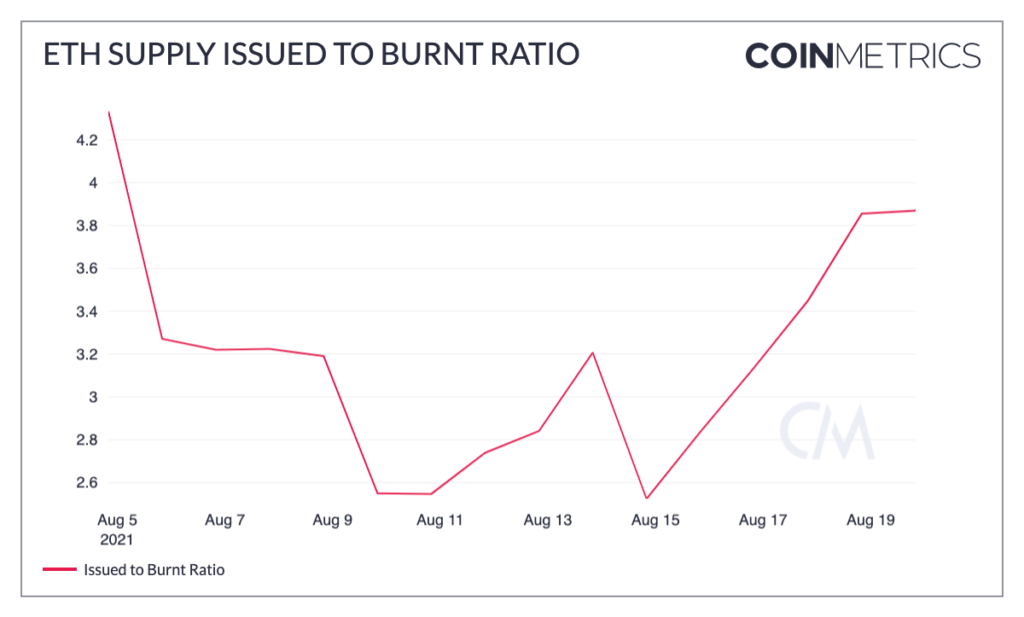 You can access the formula used to calculate this ratio here.

Paying a Base Fee is a prerequisite to have a transaction included in a block, but it does not guarantee that a transaction will in fact be picked by miners. In times of congestion, Ethereum’s transaction pricing mechanism reverts to a first-price auction, much like Bitcoin. In such events, users must pay for a Miner Tip (also known as a Priority Fee) in addition to the Base Fees. In essence, Miner Tips were designed to nudge miners to prioritize user transactions in times of network congestion. In order to track Base Fees, we have also devised the following metrics: 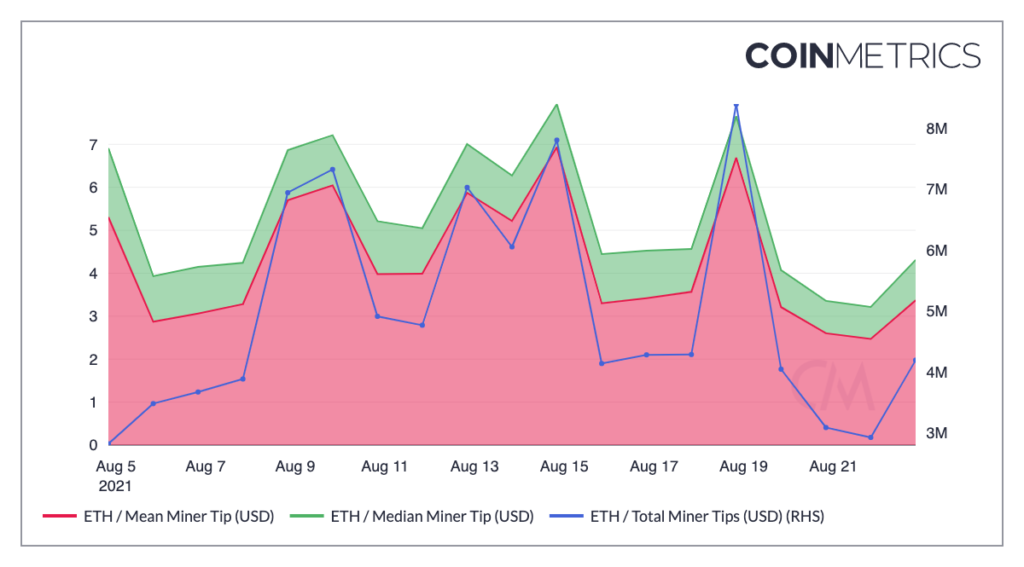 Not all wallets have natively implemented the EIP1559 transaction format upon activation. Although EIP1559 was introduced via a hard fork and, as such, it is mandatory for all network participants, there still exists a mechanism within Ethereum nodes that converts legacy transactions into EIP1559. This was put in place to minimize the impact that the new transaction type would have on Ethereum wallets.

In light of this, we have also devised the following metric that can be used to track the native adoption of the EIP1559 transaction format from industry wallets: 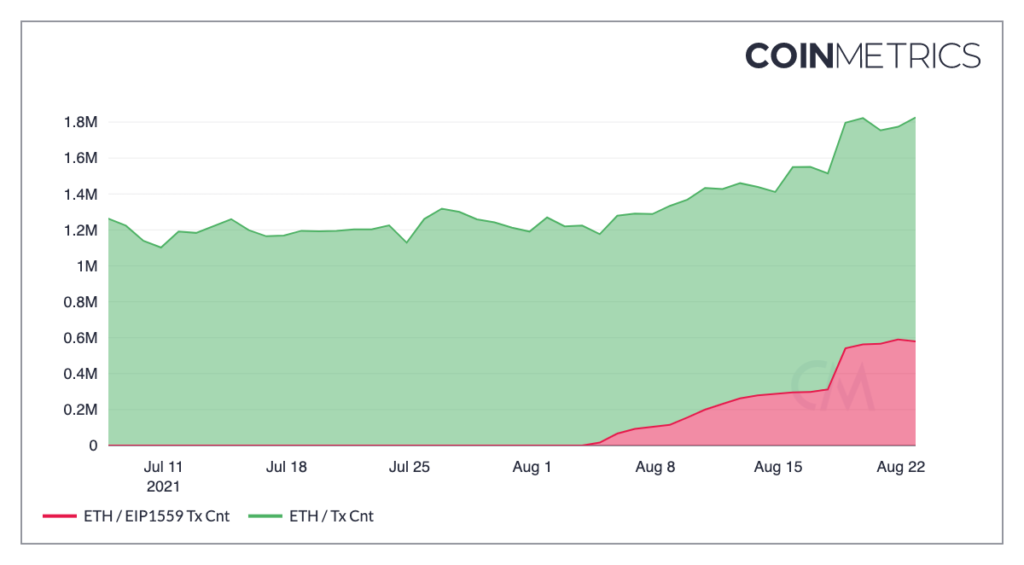 The chart above shows the number of transactions that are natively EIP1559-compliant (red), relative to all transactions taking place in the network (green). The ratio of both metrics can be calculated using our Formula Builder to get a percentage of the adoption of EIP1559: 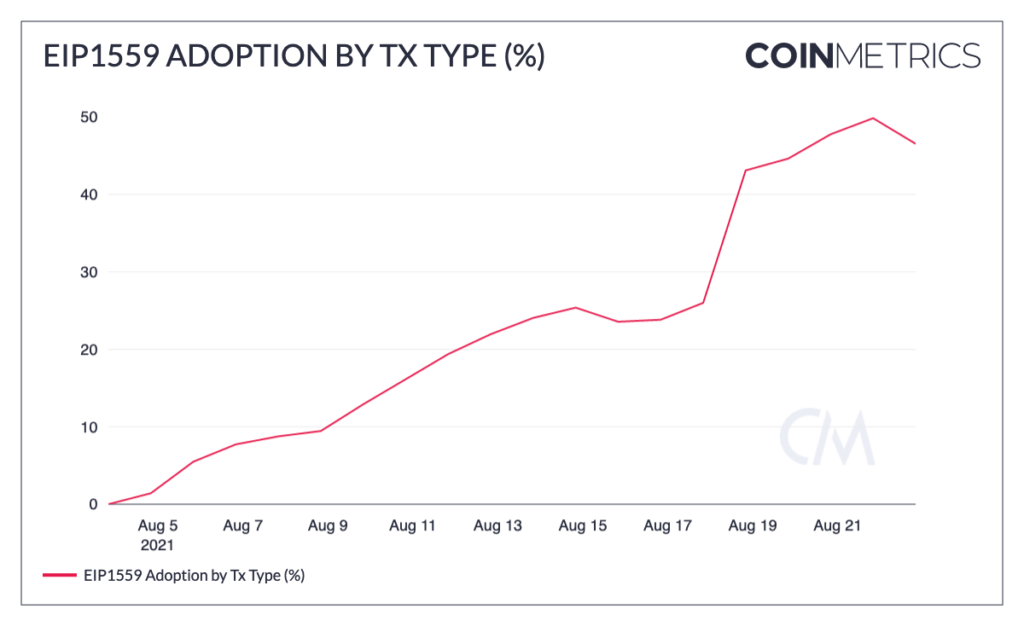 In order to track the health of Ethereum’s mining ecosystem post EIP1559, we have also expanded our Miner Flows to support ETH. Clients now have access to the full set of Miner Flows metrics for Ethereum. We believe that flows will be an important data point to track as miner revenue is expected to continue to decrease (at the protocol layer, at least).

However, as showcased by the chart above, the adoption of EIP1559 has not affected the ETH accumulation trend currently observed in addresses that belong to Miners (1-hop) as well as Mining Pools (0-hops). 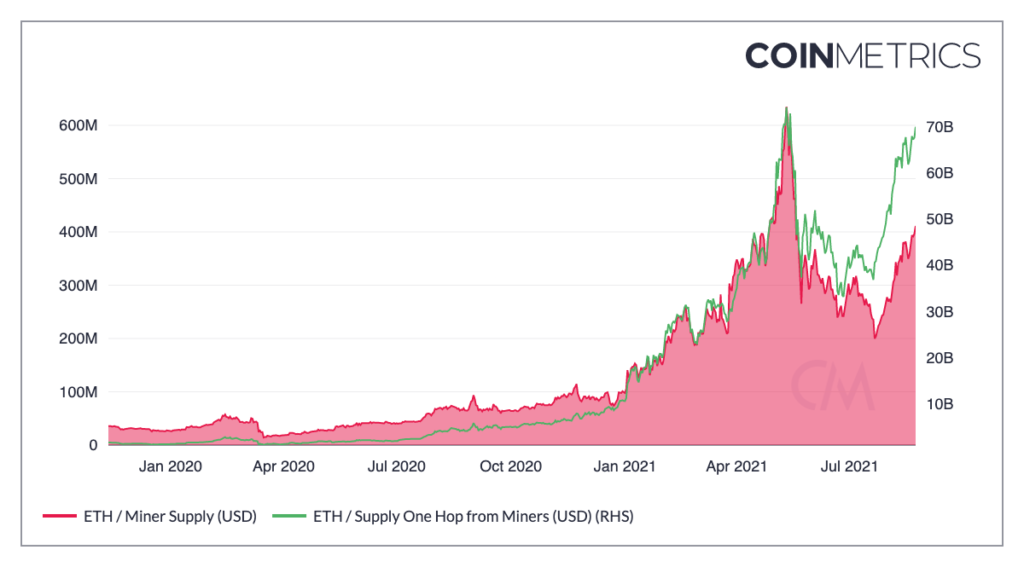 In response to client feedback, we have also expanded our address activity and count metrics. 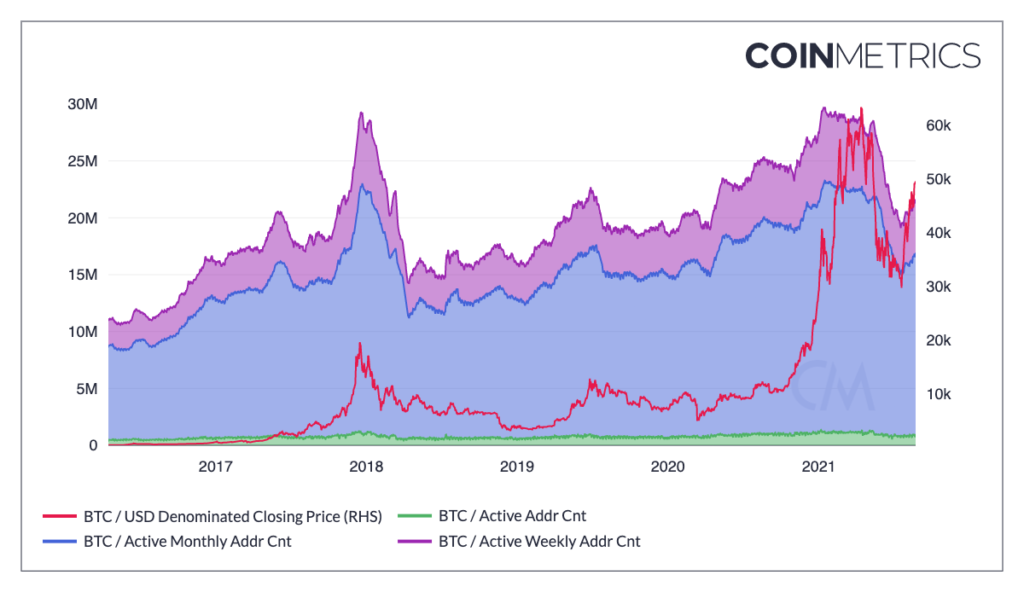 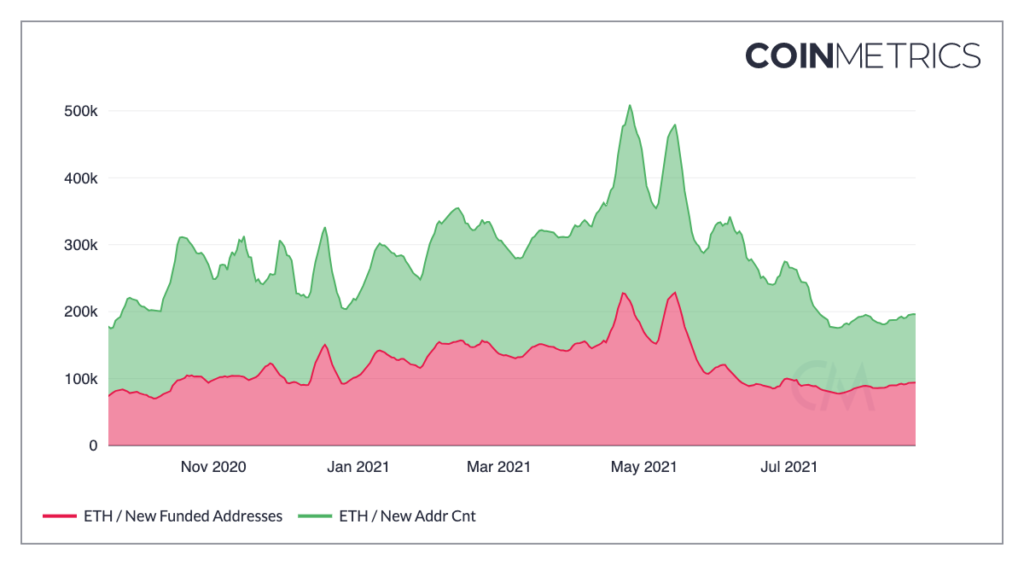 Valuation Ratios like MVRV continue to provide invaluable insight into market cycles by comparing the market valuation (Market Cap) with a network-wide cost basis (Realized Cap). At the same time, the existing miner emigration process out of China has highlighted the impact that miners have on short-term market liquidity. In this release, we have decided to combine both areas by developing 4 new valuation ratios focused on mining. 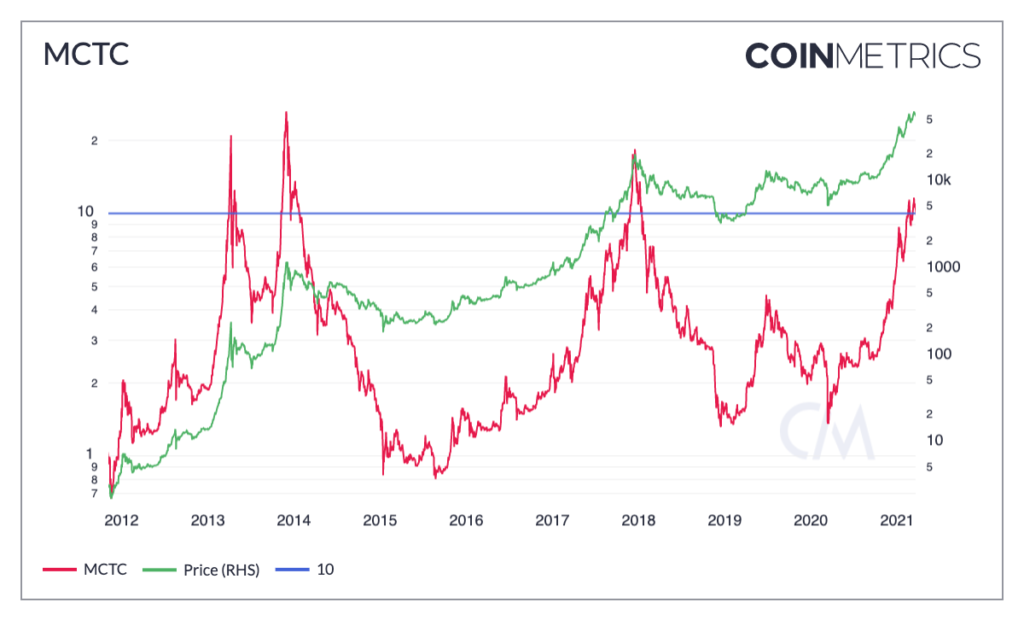 Historically, a threshold of 10 has been indicative of market tops. When this threshold is breached, it might indicate that miners are more willing to sell their assets, as their profit margins have widened. Conversely, as this ratio dips below 2, it might indicate market bottoms as miner’s willingness to sell decreases. 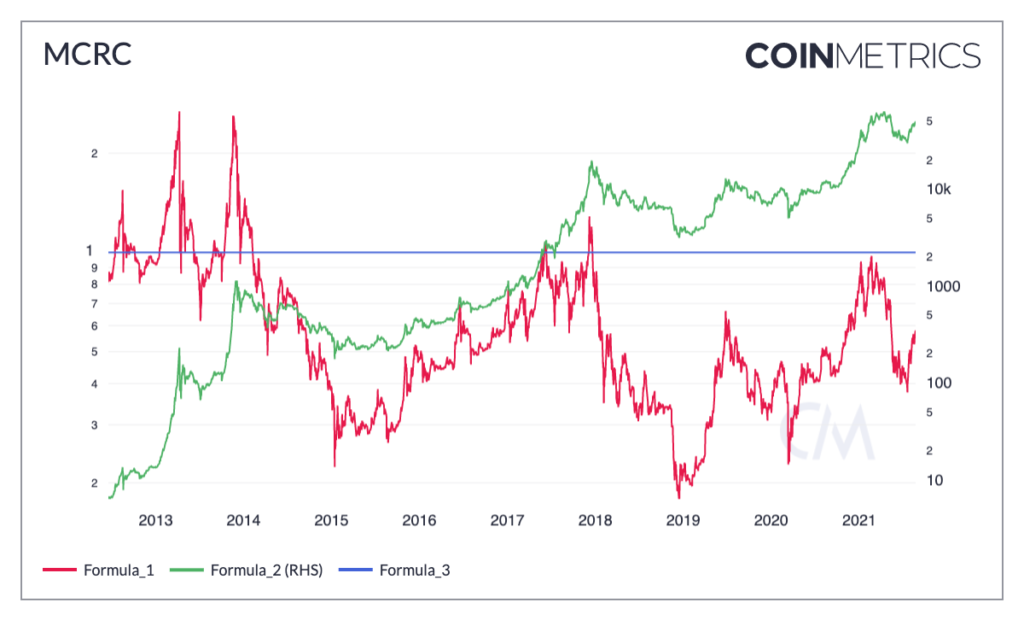 When comparing the USD value of what miners have in custody relative to the cost basis of the network as a whole, a natural threshold of 1 is relevant. When this threshold is breached, it might indicate that miners are more willing to sell their assets, as their profit margins have widened. Conversely, as this ratio nears zero, it might indicate miners are selling at a loss. 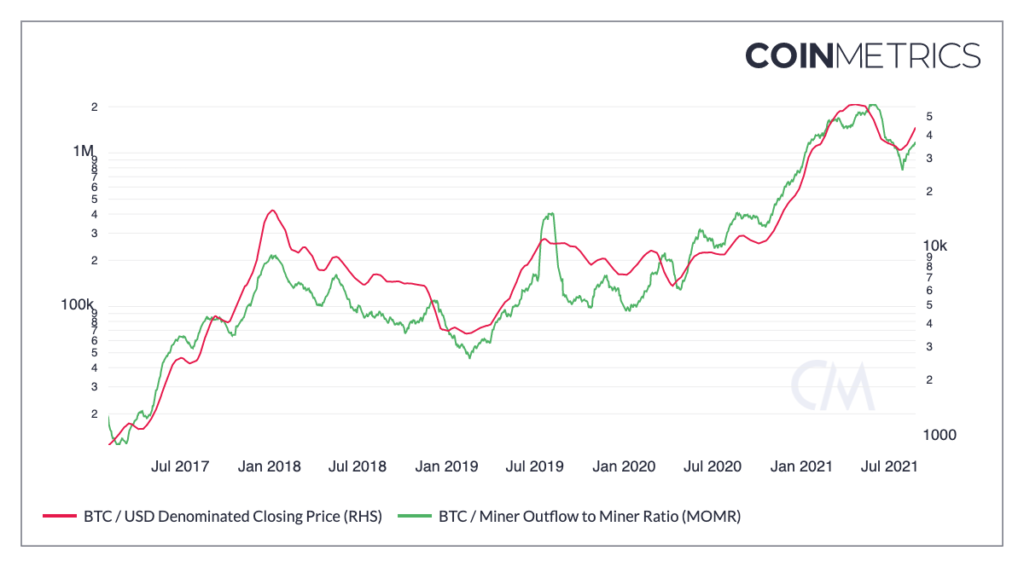 When comparing the USD value of what miners are sending relative to the funds they are receiving, there appears to be a negative relationship with price. That makes intuitive sense as it might indicate that miners are sending more funds out (which might show a higher willingness to sell) relative to what they are receiving as revenue. As such, this ratio might serve as a barometer for miner sentiment and identify liquidity events when miners might be bearish.

It is important to note that the mere act of sending funds from one address to another does not necessarily signify the act of selling. Only when there is a clear & noticeable uptick in this metric that the speculation that miners are selling is defensible, given that outflows might signify more mundane events such as a cold wallet shuffle. Additionally, it is important to note that Miner outflows are naturally very volatile. As such, we recommend using a monthly (30d) Moving Average when visualizing this metric. 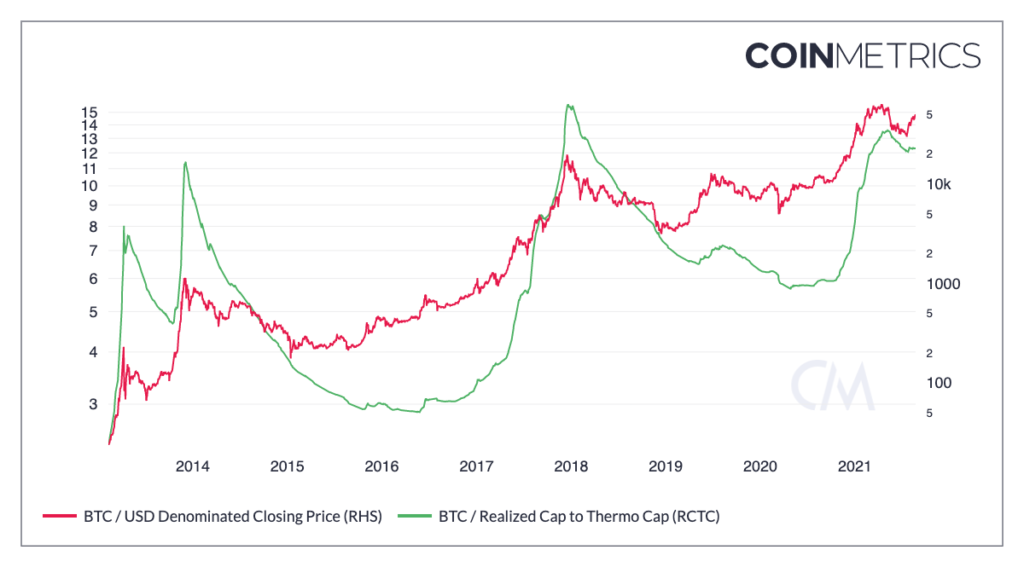 This metric fundamentally showcases the impact of miner liquity in the overall market. When the USD value of miner income is low relative to what is being realized on-chain, this could be interpreted as a sign of market tops. This metric could also be interpreted as the profit margin that might be realized by miners as it showcases the gap between profit-taking. Historically, a threshold of 10 has been indicative of market tops as a wide profit margins are being realized relative to the USD value being issued to miners.

In order to better reason about the nature of the users interacting with a cryptonetwork, it is important to understand the value of the payments that are being settled. As such, we have developed a new family of metrics that accounts for all transfers below a certain value threshold being settled in a network. This new family is called Payments (Xfers) Below $X, where $X represents the supported value thresholds. At this time, the following value USD thresholds are supported: $100, $500, $1,000 and $10,000. Through this framework, we calculate 2 metric types: 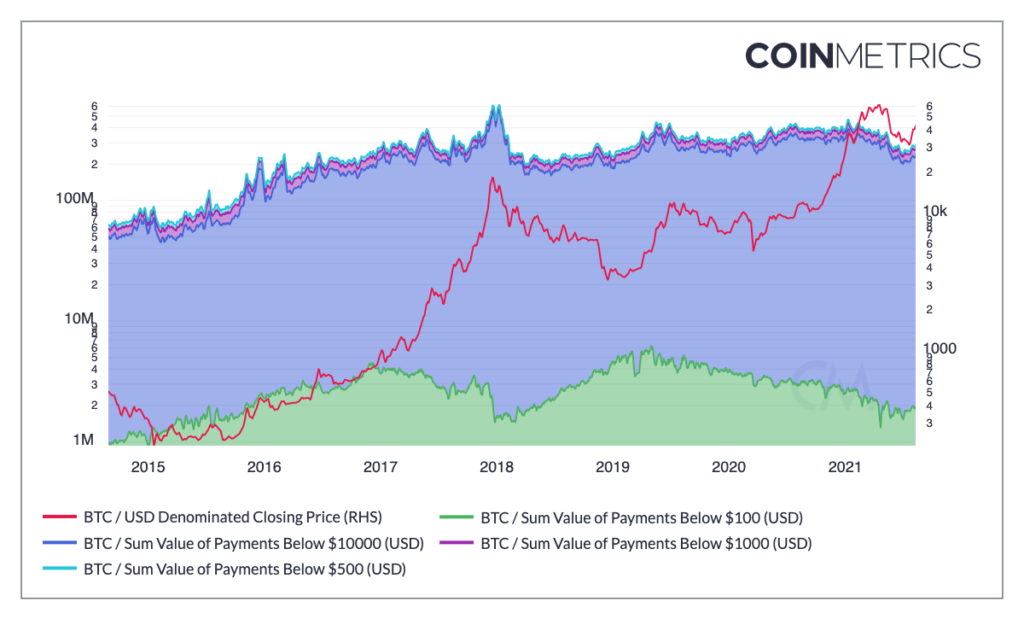 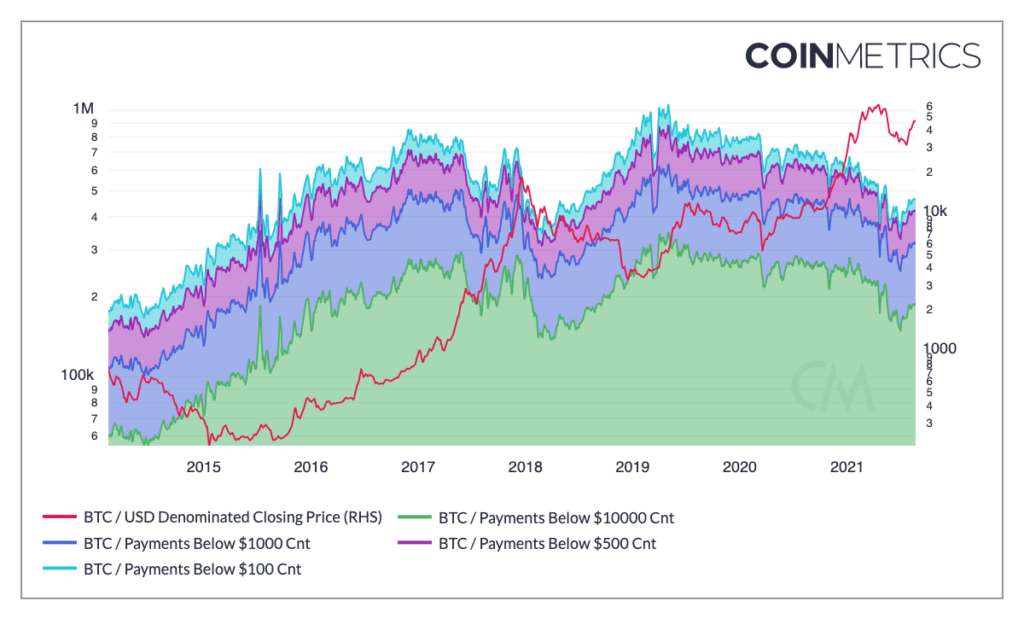 As with previous releases, we have expanded the coverage of one of our marquee metrics, Free Float Supply (SplyFF) to the following assets.