Much has been written about the fundamental differences between Bitcoin and other asset classes.

In fact, juxtapositions of Bitcoin and established commodities such as gold continue to lure swarms of newcomers into this industry, institutional and retail-alike.

But are there factors that make Bitcoin fundamentally different than other cryptoassets?

As the first-ever successful implementation of a digital currency, it’s common to see Bitcoin serve as a punching bag for technologists. To many of them, Bitcoin is a first-generation technology and, as such, it is plagued by a lack of transactional throughput and feature richness. But make no mistake: Bitcoin’s uniqueness goes far beyond the scope of technology. It is an unprecedented experiment in wealth distribution.

In bull markets, the proverbial comparisons of Bitcoin and the likes of dial-up internet, or email in the 1980s, are plentiful. Too often, these are part of deliberate marketing strategies pushed by proponents of emerging cryptoassets that reportedly succeed where Bitcoin has failed. Tragically, newcomers confronted by a strictly technological comparison framework are ultimately pushed to the margins, especially as debates turn hyper-technical.

While it is undeniable that technology plays a role in evaluating the merits of any cryptoasset, there’s certainly more to the story. What technologists and, by extension, most newcomers often overlook is the fact that cryptoassets function as digital economies. And just like real-world economies, the technology through which currency is accounted for (governments, banks, payment networks) is often far less important than how that currency was and is effectively distributed (monetary policy and wealth distribution).

On-chain data provides a new paradigm for this type of economic analysis, as it makes possible the identification of inequitable wealth distributions at the asset level. After all, blockchains at their core provide a full history of ownership structures, and that history often speaks volumes. Cronyism, amongst other unfair supply distribution models, inescapably result in incredibly centralized monetary bases. Through on-chain data, we can identify ownership structures antithetical to Bitcoin’s and quantify the degree of wealth centralization within their digital economies.

To paint a full picture of the factors that drive fair supply distribution, we will begin this post by reviewing Bitcoin’s early history. Then, we will take a closer look at distribution through mining and the impact of industrialization. Lastly, we will showcase two novel supply dispersion metrics to evaluate the wealth distribution of dozens of assets relative to Bitcoin.

The Genesis of Magical Internet Money

Bitcoin’s early history is an attestation to the novelty of a purely digital currency. Its earliest transactors were likely enticed by Satoshi’s post on the P2P foundation forum, where he first introduced the system. Back then, only the technically savvy were able or willing to continuously run a network node. Even fewer participants were able to properly custody their wallets, as that would require some understanding of PGP encryption as well as a ton of patience to deal with the inevitable bugs in Bitcoin’s first wallet (if you can even call it that). There wasn’t even an exchange rate for the earliest of adopters to begin to fathom valuing their Bitcoins.

Coupled with the aforementioned technical complexity, the results of early experiments on Bitcoin were disastrous: there is an exorbitant amount of BTC that is believed to have been permanently lost during that period. Transactors, after all, treated Bitcoin as it was back then: a curious experiment of digital monopoly money.

Perhaps no other time series better showcases the unserious nature of early Bitcoin than the chart below. It demonstrates how it took until nearly 2011 for Bitcoin transactors to start using decimals (green line) when sending BTC. Until then, all transactions used full units of BTC (purple line) as users experimented with sending full bitcoins to one another.

This is evidence of the stark difference between Bitcoin and all cryptoassets that followed. Bitcoin set a precedent for the convertibility of a digital asset and fiat currencies, like the US dollar. As a result, early adopters of other cryptoassets assumed value from day one, as opposed to carelessly experimenting. Although it is obviously better for end users to have reliable custody and some idea of asset valuation from the get-go, that experimentation in Bitcoin ultimately led to an unmatched level of supply turnover.

A direct way to measure supply turnover is through supply velocity metrics. As covered in previous SOTN issues, velocity measures the amount of times an average unit of supply has been transferred. It is generally calculated by dividing supply transferred by the total monetary base. In order to provide a better representation of short-term turnover, the particular variation of velocity showcased below filters activity by supply that was active in the trailing 1yr (instead of using total supply).

A key element of Bitcoin’s unmatched distribution are the clear periods of high supply turnover, showcased as cycles of increased velocity. Such cycles depict early adopters making way to new adopters who, when the time comes, make way to even newer adopters. In the past, Bitcoin’s ferocious price rallies have been a considerable driving force for supply turnover.

Again, precedents are important. The lack of a successful precedent for Bitcoin made it so that Fear, Uncertainty and Doubt constantly tormented the minds of early adopters, and newer adopters provided a way out through the markets.

As mentioned in the introduction, a cryptoasset’s underlying technology is most definitely not the sole determinant of its intrinsic value. However, it is still an important factor to consider as it often plays an enormous role in the distribution of supply. Bitcoin solved a decades-long problem in distributed computing dubbed the “Byzantine’s General Problem”, which has to do with reaching consensus on the validity of a statement amongst untrusted parties. What is truly remarkable is that Satoshi’s solution not only addressed the issue of distributed consensus, but did so with an activity that intrinsically fosters monetary decentralization: mining.

By design, Bitcoin mining is an activity that pushes the forces of fair distribution. In order to be profitable, miners must operate on long time horizons as they have fixed operational costs. However, the BTC reward issued for this activity widely fluctuates as Bitcoin’s price carries high volatility. This nudges miners to carefully manage their treasuries and constantly sell their holdings for operational purposes like paying for electricity, as well as strategic requirements like upgrading their hardware to remain competitive. This ultimately increases supply turnover.

Apart from the effective validation of Bitcoin transactions, this activity strengthens the network by increasing the cost to attack it. By its very nature, Bitcoin’s underlying monetary policy fosters competition as its inflation rate decreases over time with every halvening. Even though miners have consolidated and fully industrialized as time progressed, the sheer size of existing operations leaves less room for them to speculate, which pushes new supply to change hands.

Thus far, we have covered the fundamental factors that have affected Bitcoin’s supply distribution. Now it is time to assess the extent to which these factors differentiate Bitcoin from other assets. In economics, there is extensive literature on wealth inequality and supply dispersion metrics. Unfortunately, the cryptoasset industry has not converged on an equivalent set of metrics. We hope to change that, and have devised a new set of metrics to quantify wealth inequality across many cryptoassets.

The first one we will showcase is the Supply Equality Ratio (SER). It is analogous to the 20:20 Ratio; a traditional wealth inequality metric that compares the average income of the richest 20% of a society to the poorest 20%. Instead of income, the SER looks at supply held by different accounts within a network. It compares the poorest accounts (the sum held by all accounts with a balance less than 0.00001% of the supply) against the richest accounts (the sum held by all the top 1% addresses).

A high SER signifies high distribution of supply. As hypothesized, Bitcoin has the highest SER out of the assets evaluated, followed by Ether and Litecoin. This is remarkable, since Bitcoin is also the primary cryptoasset being custodied by large financial institutions; a trend that increases SER’s denominator and puts overall downward pressure on the ratio. The sustained increase in Bitcoin’s SER shows that, in spite of large institutions entering the space, Bitcoin is still very much a grassroots movement. The number of smaller accounts holding less than 1.85 BTC has continuously increased and counterbalanced the growth of top 1% addresses.

Another way to assess Supply Dispersion is through the Network Distribution Factor (NDF). This ratio encompasses a broader economic group, perhaps equivalent to a combination of the middle and lower classes. It is calculated by assessing the aggregate supply in addresses holding more than 0.01% of a cryptoasset’s supply and dividing that figure by the total supply. A low NDF signifies better distribution as there are fewer entities at the top 0.01%. Conversely, a NDF close to 1 signifies a very low cryptoasset distribution. 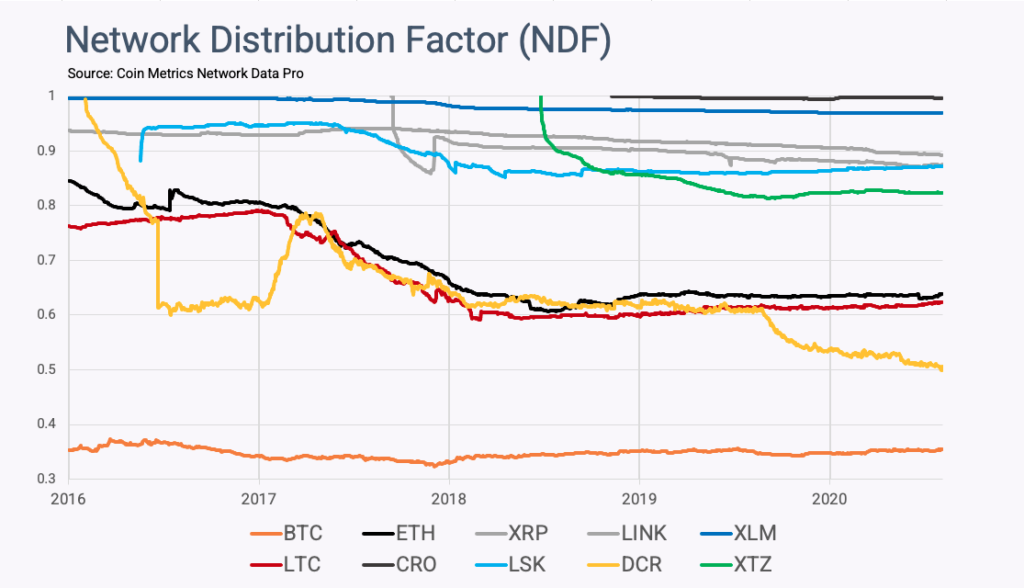 Once again, Bitcoin has the highest asset distribution as measured by the NDF, followed by Decred, Litecoin and Ether.

We are just scratching the surface when it comes to supply dispersion metrics, but SER and NDF provide a glimpse of Bitcoin’s unique distribution. In the future, we hope to continue to explore this area with better filtering heuristics to improve how addresses are aggregated at the wallet level.

In conclusion, Bitcoin’s turbulent history as the first-ever successful implementation of a cryptoasset contributed to high levels of supply turnover through the 2010s. Its fair issuance mechanism further supported distribution since miners have an intrinsic need to redistribute new issuance. Combined, these factors have made Bitcoin the most equitable cryptoasset in existence, as exemplified by the SER and NDF ratios.

Page load link
We and selected third parties use cookies or similar technologies for technical purposes and, with your consent, for other purposes, as specified in the Privacy Policy. OK Reject
Go to Top